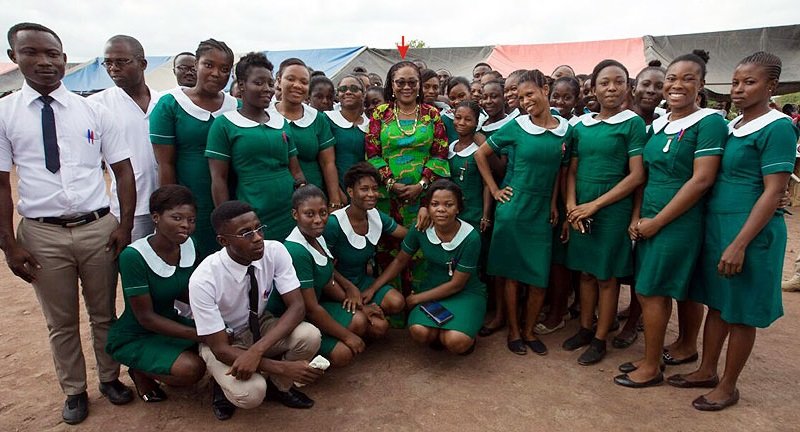 First Lady, Mrs. Lordina Mahama has made a strong case for health workers to be given the maximum support for efficient service.

She said that, the government is resolved to attain universal health care for all.

This according to her, is reflected in the massive investment in the health sector.

She however, noted that government alone cannot make this dream a reality and urged other partners to come on board.

Mrs. Mahama was speaking at Sunyani in the Brong Ahafo region when she presented medical supplies to the Sunyani Municipal Hospital.

The First Lady was in the district to present assorted medical supplies and equipment to the Drobo District Hospital in her bid to supplement government’s efforts of attaining universal healthcare for all Ghanaians.

Mrs. Mahama said investing in the youth was the most important strategy that Ghana could adopt to enable it have a healthy population that could contribute to the development of “our dear nation”.

She also called on African countries to invest in the health, education, and the general development of adolescents to benefit from its fast growing youthful population.

She said a well informed and educated population could accelerate the growth and prosperity of any nation and Ghana needs such core young people that are educated, confident, innovative and healthy for national development.

“We must consider all groups of people, including adolescent girls, persons with disabilities, young migrants, and all other marginalized groups in building the nation,” she said.

MedShare of the United States of America is a major partner of the Lordina Foundation, headed by Mrs. Mahama, in its nationwide medical supplies mission, which had so far taken the team to 48 hospitals in eight regions of Ghana.

She said because the health of the people was paramount and had a significant impact on the local economy and the country in general, her Foundation would continue to work in cooperation with other organisations, to support plans that would assist the underprivileged in society to access quality healthcare delivery.

“This I believe is important, because it would raise the health status and well-being of our communities, especially in relation to women and children,” Mrs. Mahama said.

She, however, advised the people to keep their surroundings clean, especially as the rains set in, since an unclean environment was associated with diseases such as cholera.

“This year there is prediction that the rains will be heavy, and there is likelihood of flooding. Let us all clear the filth from our gutters and drains. We must also practice a high level of personal hygiene to prevent the outbreak of diseases”, the First Lady said.

She said as government works to address the drainage systems in the country, the citizens must also do their part to minimize the negative effect of the rains saying “the lives of all Ghanaians matter, and we do not want to lose even a single life, during this year’s rainy season”.

Ms. Grace Vire, Drobo South District Director of Health Services, who received the equipment on behalf of the hospital, thanked the First Lady for the gesture.