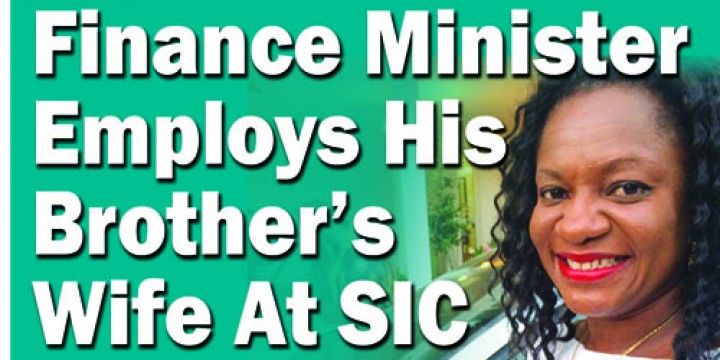 Finance Minister, Ken Ofori-Atta; a cousin to President Nana Akufo-Addo, has used his position to push the wife of his direct younger brother; Earl Ofori-Atta to make her Deputy Managing Director, of State Insurance Company (SIC).

Eno Ofori-Atta nee Kusi-Boateng, will be acting at her new capacity until a substantive Deputy Managing Director, is appointed by the Board of Directors of the company.

Until her appointment, Eno, was with the Women’s World Banking (WWB) in Accra, where according to credible sources, she had remained for a period of time.

Her husband, Earl, was with his brother’s Data Bank in Kumasi until their cousin; Nana Akufo-Addo, formed the government and he conveniently relocated back to Accra, to be closer to the seat of government.

With Data Bank in coma and most of its senior staff engaged by Ken Ofori-Atta, it is unclear yet ,what Earl, who is a senior to Duke Ofori-Atta, is doing currently by way of employment.

Earl and Duke, are said to always be dependent on their big brother, who in this case is the finance minister to put body and soul together.

The SIC job is, therefore, seen as meant for Earl with his wife, only fronting.

Duke, who President Akufo-Addo, recently placed on Ghana@60 celebration, was the man who the New Patriotic Party (NPP) Member of Parliament (MP) for Assin Central, Kennedy Ohene Agyapong, who together with Gabby Asare Ochere Darko; a nephew of the president, was accused of demanding money from people, who crave to see the president at the Flagstaff House.

Eno holds a BA in law and sociology from the Kwame Nkrumah University of Science and Technology (KNUST) and MBA in Management from the same institution.

She has listed on her Linkedin account as the Chief Executive of Payflex Micro finance company, a subsidiary of Affinity Finance Africa, and head of Credit at the Women’s World Banking.

Founded in June 2005, SIC-FSL, is specialized in an array of investment management services, such as stock brokerage, portfolio & pension management, as well as corporate finance & advisory services.

It is licensed as an Investment Advisor and a Broker-Dealer by the Securities & Exchange Commission (SEC) and is a member of the Ghana Stock Exchange (GSE).

This comes at a time, when many party bigwigs and members, are still gnashing their teeth and waiting impatiently for their appointments from Nana Akufo-Addo, he is endlessly and busily appointing his family members from the Eastern Region to very juicy positions.

There is a tall list of family, friends and in-laws of President Akufo-Addo, serving as Ministers, agency heads, boards member boards, ambassadors and also at the Judiciary among others.