Ghanaians and the business community were shocked with the manner in which the $2.25B bond was issued in March 2017 as it was done in secrecy(lack of transparency) and not in conformity with the guidelines for public borrowing and Article 181 of the 1992 Constitution.

The finding by CHRAJ is that the respondent (the Minister of Finance Ken Ofori Atta) is cleared of the “CONFLICT OF INTEREST ” allegation but the commission in its findings made some serious revelations on “potential conflict of interest” as refered to in the observation subtitle in the report. The commission was very clear on the issue with regards to the Finance Minister as been a former shareholder, beneficiary of several companies in the securities market and more importantly a former director to some of these companies and his interest to see these institutions attain a certain growth within that sector has the Potential to Conflict with the interest of the State.This revelations by the commission is very serious with its potential risk alerted is enormous to affect the securities sector of the country.

There was also lack of transparency in the process as undue advantage was given to the banks that acted as joint book runners and primary dealers.

These serious issues raised by the commission demand immediate attention by Securities and Exchange Commission, Parliament and the Government of Ghana as a whole.

Strategic Thinkers Network Africa strongly believe that the potential conflict of interest of the standing of the current finance Minister is a potential threat to the state and must RESIGN from his position. 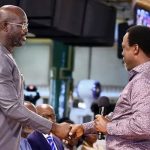