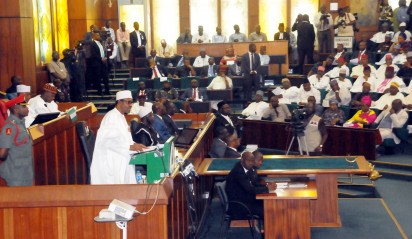 LAGOS—As the pressure on federal revenue mounts following steady decline in oil revenue, the Federal Government would be resorting to a Sukuk Bond for funding the widening budget deficit.

Sukuk is a financial certificate, similar to the traditional government bond, but complies with Sharia, Islamic religious law.

The Debt Management Office, DMO, and Securities and Exchange Commission, SEC, are collaborating in an effort to issue the Nigerian sovereign Islamic bonds this year.

Details of the expected revenue from the bond is not yet disclosed but officials said they expect significant bridging of the 2016 budget deficit which has exceeded the initial N2.2 trillion estimate.

According to DMO “issuing a sovereign Sukuk will attract significant amounts of affordable capital from the Gulf countries and other established Islamic markets around the world into Nigeria.”

Though Nigeria would be the third West African country to issue Sukuk after Senegal and Cote d’ Voire, Osun State had rolled out USD62 million Sukuk in 2013.

Because the traditional bond comes with interest paying structure which is not permissible under the Islamic financial system, the issuer of a Sukuk bond would sell the certificate to an investor group, who then rents it back to the issuer for a predetermined rental fee.

The issuer also makes a contractual promise to buy back the bonds at a future date at par value.

Islamic bonds are structured in such a way as to generate returns to investors without infringing Islamic law that prohibits interest.

The Sukuk option in federal government finance will be coming in addition with other unconventional budget funding strategies of the President Muhammadu Buhari’s first budget.

Other unconventional funding strategies include plans to raise N350 billion from recoveries of stolen funds in the on-going anti-graft war.

The 2016 budget financing plan, according to a finance ministry source, envisages significant revenue from blocking leakages expected to yield over N1.0 trillion during the 2016 fiscal year.

The breakdown of the revenue side of the budget shows several unconventional sources of funding for the budget.

Key among them includes a revenue optimising measure expected to be complemented by initiatives meant to reduce wastage of public funds such as the recently established Efficiency Unit meant to identify and eliminate wasteful spending, duplication and other inefficiencies across Ministries, Departments and Agencies, MDAs.

Other waste reduction initiatives include engagement of costing experts to scrutinize the 2016 budget proposals with a view to further improving efficiency. Also, government intends to extend the Integrated Personnel Payroll Information System, IPPIS, to all MDAs in order to maintain a lean payroll.

With a projected revenue of N3.86 trillion in the face of dwindling crude oil receipts, government estimates that oil revenues contribute N820 billion of the total revenue; non-oil revenues, comprising Company Income Tax, CIT, Value Added Tax, VAT, Customs and Excise duties, and Federation Account levies, are expected to contribute N1.45 trillion; while independent revenues are expected to contribute N1.51 trillion through the enforcement of the Fiscal Responsibility Act, 2007 and public expenditure reforms in all MDAs.

In addition, the government intends to significantly improve the collection and remittance of independent revenues from government agencies with the full implementation of the Treasury Single Account, TSA.

A finance ministry source who said that the budget breakdown would answer all the posers raised by critics of the budget, explained that the delay in putting the budget together as well as the errors recently corrected were as a result of the difficulties in balancing Nigerian’s expectations with realities on ground.