Residents of Fanteakwa in the Eastern Region are on high alert following the expulsion of nomads from Agogo in the Ashanti Region.

The residents want to prevent the influx of the wandering herdsmen who have been chased out from Agogo.

Fanteakwa is the next possible destination for the herdsmen but the Metropolitan Chief Executive of the area Abass Fuseini, told Joy News Fanteakwa will no longer be a grazing ground for the cattle.

He told Joy News the District Security Command (DISEC) has met and has taken far reaching decisions on how to prevent the nomads from entering the area.

DISEC has constituted a committee made up of the youth in the area to track the activities of some of the nomads who are already in Fanteakwa.

“We have difficulties dealing with them (nomads); we registered them and took their photographs and identities; we asked that they should wear their jackets so we know their identities; when they realised the jackets were exposing them they stopped wearing them,” he said.

He added that they devised another plan which is to ask the herdsmen to paint the horns of their cattle so they can identify the owner of the cattle by the colour of the horn of those cattle.

That too did not work out as expected. He said they are therefore cautious not to add to the problems they have already by opening the doors of Fanteakwa to more of the nomads coming from Agogo. 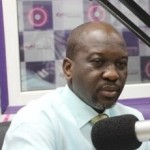