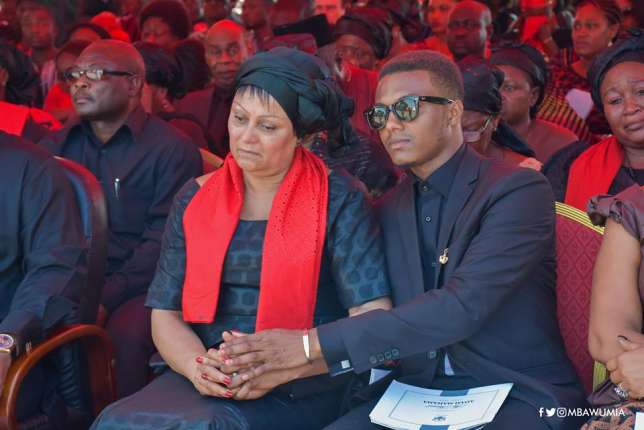 The family of slain Major Maxwell Adam Mahama wants a monument of the late military man erected at the Tema roundabout on the Accra-Tema motorway in memory of their kinsman.

The request is the first the bereaved family has made since the soldier was gruesomely murdered at Denkyira Obuasi in the Central region where the late Major was leading a team to fight galamsey.

Uncle of the late Major, Emmanuel Bamford disclosed this to JoyNews’ Latif Iddrisu at last night’s vigil for the late military man.
“I have spoken to the elders of the family and everybody agrees with it,” he said.

When he was asked if the family will be disappointed if the Roundabout is not named after their son, he said “I wouldn’t jump into conclusion. I will wait for the government. We have proposed that to them,” he stated.
He was particularly disappointed with what he described as the backward cowardice shown by the miscreants who killed their son.

Emmanuel Bamford said any of the residents had the opportunity to be a hero by standing up against the lynching and would have been celebrated but they all missed it.
The late Captain Mahama who was posthumously given a rank of Major was buried on Friday in a fitting state burial that saw the country’s top echelons in politics and the military all attending.

One by one, tributes were read for the fallen hero by the vice president Dr Mahamudu Bawumia, the Majority Leader Osei Kyei Mensah-Bonsu, the wife Barbra Mahama and parents of the deceased person.

Each one of them sung the chorus of a man who lived so others can live and died so others who may likely be killed in the same manner he died may perhaps be spared from the pain and humiliation.
He was killed by residents of Denkyira-Obuasi on May 29, 2017, where he was commanding army personnel to fight illegal mining.
Mistaken for an armed robber because he had a pistol on him while going on jogging, the army officer was lynched by men, women and children.
He was burnt and stripped in addition, the worse form of death anyone can suffer.

The news about his death spread fast on social media and was met with national indignation.
Some 42 persons have so far been arrested and remanded pending further investigations and possible prosecutions.

The president Nana Akufo-Addo announced a GHS500,000 memorial fund in honour of the wife and kids.

He also pledged a personal contribution of GHS50,000 and said cabinet is still considering a request for a monument to be built in honour of the fallen hero.
Major Mahama was finally laid to rest on Friday.