The Akufo Addo government has cemented its reputation as the most nepotistic in the history of Ghana following the latest rounds of appointments. President Akufo Addo has firmly entrenched familial connections as a key pre-requisite for appointments into his government.

This time round relatives of the Vice President, Mahamadu Bawumia, have joined those of Akufo Addo himself in government. Immediate-past Chairman of the People’s National Convention(PNC) and father of Second Lady, Samira Bawumia, Alhaji Ahmed Ramadan, has been made Ghana’s envoy to the United Arab Emirates.

The veteran politician, who was until the emergence of his son-in-law Bawumia as running mate to Akufo Addo in the 2008 elections, an avowed critic of the NPP, is believed to have secured the plum job due to his blood relations to the second lady.

Many of Mr Ramadan’s former compatriots in the struggle in the heady days of opposition prior to the 2008 elections, expressed surprise at his muted response to the NPP’s stance on national affairs once his in-law Bawumia emerged as running mate to Akufo Addo as they believed his commitment to the cause was greater than familial considerations.

Mr Ramadan joins his son, Abu Ramadan, who has been made the number two man of disaster relief agency, NADMO. The younger Ramadan, despite masquerading as a PNC activist, has always been believed to be a closet NPP supporter in view of his posturing on national affairs. He was used as a surrogate by the NPP in the many distractive court cases brought against the Electoral Commission in the run-up to the 2016 elections.
President Akufo Addo has also appointed his cousin, Rhodaline Baafour-Gyimah, to the board of national oil trader, GOIL. Mrs Baafour-Gyimah’s appointment will add to an unprecedented list of relatives, friends and close business associates who have landed juicy appointments in his government.
At the last count, close to twenty members of Akufo Addo’s immediate and extended family as well very close friends and associates had been given a variety of appointments. In a bizarre twist, two women with whom Akufo Addo is known to have had amorous relations have been rewarded with ambassadorial roles.
Virginia Hesse, whose previously undisclosed 54 year old daughter Akufo Addo sired during their University days, is now Ghana’s ambassador to the Czech Republic while Prof Abena Busia, daughter of one-time Prime Minister, Abrefa Busia, is currently serving as Ghana’s Ambassador to Brazil.
She is known to have been on the verge of marriage to Akufo Addo until the proposed liaison fell through in the early nineties.
Other members of Akufo Addo’s family who also serve in his government include;
Nana Asante Bediatuo who is the President’s Executive Secretary, Works and Housing Minster Samuel Atta Akyea, Transport Minister Kwesi Amoako Atta and Attorney-General Gloria Akufo whose brother Daniel Akufo is now District Chief Executive of Shai Osu Doku.
Akufo Addo’s daughter, Gyankroma Akufo Addo serves on the Creative Arts Council.
The President’s nephew, Asare Otchere Darko, popularly known as Gabby, is said to be the most powerful man in the Akufo Addo administration second only to his uncle. Despite not holding a formal government position, and several denials of same, Gabby is loathed by many in the NPP who accuse him of hijacking Akufo Addo and conducting the governmental orchestra.
His overbearing influence on the President in matters relating to appointments and policy making has made him the subject of recent public attacks by acerbic NPP MP, Kennedy Agyapong and self-styled prophet, Owusu Bempah.
Gabby’s wife, Nana Adjoa Hackman is not to be outdone in the grabbing of juicy appointments by family and friends of the President. She sits on the Board of state Petroleum firm, GNPC.
Two siblings of Ken Ofori Atta, Nana Yaa Ofori Atta and Fredua Ofori Atta both cousins of the President, are also said to hover around the Presidency in undefined capacities. The Finance Minister’s sister-in-law, Eno Ofori Attah, was recently made Deputy Managing Director of SIC Financial Services while his sister, Alice Ofori Atta, currently heads the Tema Development Corporation.
The governmental hegemony has been extended to other supposedly independent arms of government. Akufo Addo ensured his family presence was felt in the Judiciary by appointing his relative, Sophia Akufo to the position of chief justice.
Senior Minister, Yaw Osafo Marfo recently courted anger among Ghanaians including many NPP members when he ensured the creation of additional portfolios within the National Communications Authority (NCA) and the Social Security and National Insurance Trust (SSNIT).
Wife of NPP broadcaster, Paul Adom Otchere, Rosemary Adom Otchere has also been given board membership of state investment promoter, the Ghana Free Zones Board. 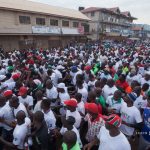