Former Minister of Education, Dr Obiageli Ezekwesili yesterday lamented that the Federal Ministry of Education lacked an updated data of secondary schools in the country as at the time she took over the helm of affairs.

Ezekwesili who is the Coordinator of Bring Back Our Girls forum, was speaking at this year’s Gani Fawehinmi Lecture with the theme: “The Collapse of Public Education and the Past, Present and Future Prospects of the Nigerian State,”‎ organised by the Nigerian Bar Association (NBA), Ikeja branch.

According to Ezekwesili, the state of education in the country needed holistic reform to meet the international standard reminiscent of the old good days.

“‎In 2006/2007, one of the most shocking things discovered was that there had not been a comprehensive inspection of schools for more than two and half decades.

“So, ‎when I came in, we introduced what is known as Operation Reach Out to All Secondary Schools (OPRASS) and it was through it that we reached out to all secondary schools in the country. At the end of the exercise, we were able to come up with the statistics that over 75 percent of secondary in Nigeria were run through public system while private ownership accounted for 25 percent,” the former Minister said.

Ezekwesili however regretted that similar initiative conceived for primary schools in the country was abandoned after she left as minister in 2007.
On dwindling standard of education, Ezekwesili said the ministry under her, adopted a proxy approach to find out the declining performance of students in the annual WASSCE examinations in the last 10 years before 2006.

“The outcome of the investigation which was also proven by academic research undertaken was that there was a decline in the quality of teachers ‎we had in our secondary schools. We realised that there was no amount of structures put in place, no amount of instructional materials put in place that would make students perform without quality teachers,” she said.

Contributing, Mr. Femi Falana (SAN) challenged the NBA to enhance the fight against corruption by partnering with the Economic and Financial Crimes Commission (EFCC).

He said: “The NBA should aid the EFCC in its fight against corruption because the EFCC should not be alone in this fight.

“The NBA should aid the EFCC to ensure that any individual that had taken a kobo from the $320 million Abacha loot should be held accountable. The sharing of the Abacha loot was a typical example of thieves stealing from thieves.

Contributing, Mr Mohammed Fawehinmi, son of the late Gani Fawehinmi, said that education was a passion that was very dear to his late father’s heart.

He said: “Education was very dear to my late father’s heart; if education is not taken seriously, children in the society will turn to thugs. The government should help ensure that the children in Lagos State get access to free education in public schools.” 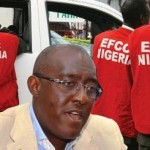