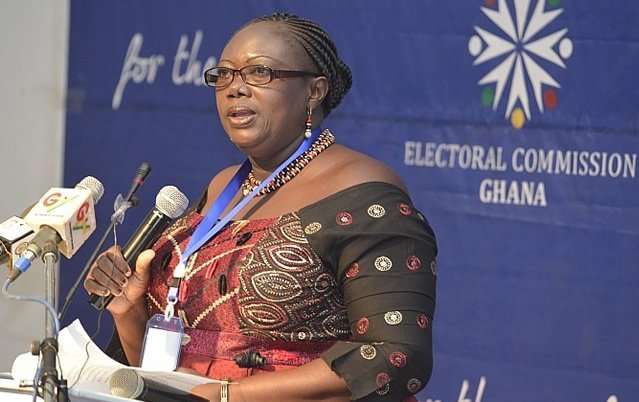 The Economic and Organised Crime Office (EOCO) has rendered an apology to embattled Deputy Chair of the Electoral Commission, Georgina Opoku Amankwah, after her office was invaded on Monday
Executive Director of EOCO, K.K Amoah, together with some armed Police personnel stormed the office of the Deputy EC Chair to force her out after she reported to work on Monday.

Mrs. Amankwah had been on leave since July 2017 at the insistence of the investigative agency following allegations of misappropriation of funds.

She was accused together with two other EC officials of engaging in financial impropriety with regards to the missing GH¢480,000 from the Endowment Fund at the Commission.

Her return to work was therefore considered as illegitimate by the EOCO, who sent officials to forcibly drive her out of her office.

The episode escalated into a scene after Mrs. Amankwah declined to be forced out, explaining that the EOCO had no right to take such an action.

However, both parties later reached an amicable settlement, with the Deputy EC Chair agreeing to stay home for the next 14 days as the issue is resolved.

In the latest development, lawyer for the embattled Deputy EC Chair Nana Boakye Adu Poku has revealed that the EOCO boss has rendered an apology to his client for the violent invasion of her office.

Speaking on Joy FM’s Top Story, the lawyer explained that EOCO boss K.K Amoah had an in-camera meeting with Mrs. Amankwah, where he admitted that his outfit did not act in the right way and subsequently apologised for their treatment of the Deputy EC Chair.

“We actually indicated to the EOCO boss how unhappy we were with the style they came in, if indeed they wanted to have a conversation with us. That was not a way of starting a conversation.

“So we indicated to him how unhappy we were with their style which he conceded and apologized,” the lawyer added.