Some casual electoral officers who supervised the District Assembly Elections about a month ago, created a disorderly scene at the national headquarters of the Electoral Commission on Friday over what they say were unnecessary cumbersome processes they had to go through to get their allowances

The officers, numbering about 200, were visibly exasperated about situation and described as unfair treatment being meted out to them.

“They called me from the house to come for my money which means you have my records. So why then should I come here, and write my name again more than once before you take me some where to form a queue” a frustrated officer lamented.

Another aggrieved officer said “the Electoral Commission needs to change their ways of doing things. They need to advance.”

This is not the first time officers who are hired to assist the EC with elections have been unhappy about issues of payment.

In 2013, about 120,000 officers complained about delays in the payment of their monies for supervising the 2012 elections. 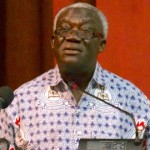