The Electoral Commission has announced a tranche of measures intended to ensure credible free and fair polls.
Speaking at a the press briefing on Tuesday, Chairperson Mrs. Charlotte Osei quantified that all electoral related materials including ballot papers, indelible ink, and biometric machines have been deployed to the various voting centres.

Mrs. Osei cautioned that no bags and purses, pens, food and drinks, and mobile phones would be allowed in the voting screen to help ensure free and credible electioneering process.

The chairperson of the electoral commission also detailed some security measures agreed between the commission and the security set up to preserve the peace of the polls.

According to the EC chair, nobody will be allowed to use a motorbike within 400 metres of a polling station. The sale of alcohol has also been banned within 500 metres from a polling station.
She stated that security agencies in charge of the polls have been empowered to deal ruthlessly with anyone who defies any of the directives. 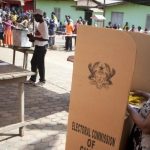