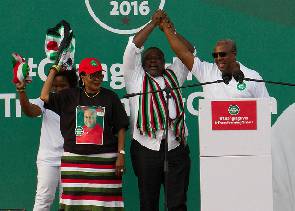 President John Dramani Mahama has predicted a tough election 2016 but has admonished supporters of the National Democratic Congress (NDC) to fix their eyes on the ball.

He is optimistic “victory” is in sight for the ruling party come December 7, but it will take every hand on deck to secure that triumph.

“Don’t be distracted and we have a good track record,” Mahama, who is the 2016 presidential candidate of the NDC told a teeming crowd at Cape Coast during the launch of the party’s campaign.

According to him, if the NDC is “given another term we’ll do even more,” which will pave way for them to “continue to change more lives and transform Ghana.”

He added: “I pledge to remain true to the ideals of the party. It’s going to be a hard election… we have what it takes to win.”

Mahama, who is seeking a second term in office, having won the 2012 elections amidst an electoral dispute, called on all those who lost the primaries to lend their support to the ones seeking power because “none of us is the alpha and omega of this party.”

He described his first term as “a challenging one, but positive.”

“My first term as president has been challenging but also very positive. It began with the election case in court where many Ghanaians sat and followed through with process because it was televised and the international community also been slow with the necessary support because of the uncertainty which surrounding the outcome,” the President stated. 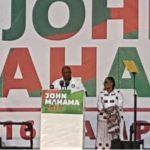