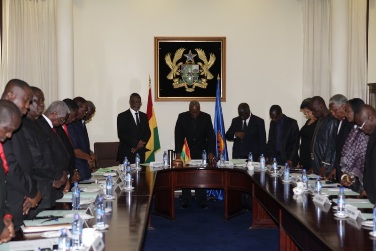 President John Dramani Mahama has called for an emergency meeting to inquire into concerns of errors detected in the billing of power consumed by customers of the Electricity Company of Ghana (ECG).

The meeting which is expected to come off, Thursday, at the Flagstaff House will bring together key players in the energy sector to discuss how best they could put measures in place to address the anomaly.

Among the stakeholders expected to be part of the meeting are the Public Utilities Regulatory Commission (PURC), ECG, Energy Commission, and the Ministry of Power.

Chairman of the Parliamentary Select Committee on Mines and Energy, Alhaji Amadu Sorogho who dropped the hint when interacting with Accra-based Okay FM said President Mahama who is disturbed about the numerous complaints will demand answers from officials of the institutions mentioned above about how they are addressing the issue.

On Tuesday, the Public Utilities Regulatory Commission (PURC) issued a directive ordering the ECG to suspend the implementation of the new billing software following massive outcry on the move.

There were numerous complaints from residential and business customers of the ECG about suspected anomalies in their bills following the last adjustment in utility tariffs by the PURC.

Government in the wake of the anomalies in the new billing software and the incessant cry by customers on the introduction of the new system instructed the PURC to investigate the numerous complaints to establish its credibility or otherwise.

The users of electricity complained that the anomalies are affecting their income and operating costs, the reason they are calling on government to intervene.

The PURC following the billing problems has barred the ECG from going ahead with the implementation of the new software.GhanaPoliticsOnline.Com

The Director of Public Affairs and External Relations of the PURC said all these anomalies have come about as a result of the implementation of the billing software.

“For instance throughout our investigation; it came to light that even migrating customer data from the old system to the new system was a problem. We couldn’t get the accurate data that was needed for the billing. Some of the bills that we interrogated, the billing cycle was 43 days instead of 28 days. The billing cycle according to law is 28 days-within the 28 days the customer should pay the bill within 14 days after the 28 days. They were billing the customers 43 days. If you’re billing me within a 43 day cycle, what then will happen is you move me to a higher tariff band -That means I’m going to pay a higher tariff than somebody who uses fewer units. So all these anomalies have come about as a result of the implementation of the new billing system,” Nana Yaa Jantuah explained in an interview with Accra-based Citi FM.

On the same day, the Speaker of Parliament, Rt. Hon. Edward Doe Adjaho, also directed the Mines and Energy Committee step up efforts in investigating the matter and submit their report to the plenary for consideration and subsequent adoption.

The directive follows complaints by Members of the House over the challenges consumers are going through as a result of the errors associated with the billing of their pre-paid meters.

Majority Chief Whip, Hon. Muhammed Mubarak Muntaka who raised the issue told the Speaker that the situation is so alarming that in some cases the cost of consumption has almost doubled, thereby, imposing severe hardship on the ordinary Ghanaian.

According to him, although some individuals who reported the anomaly to the ECG have been attended to and the errors in their billing corrected, the overbilling still persists among majority of Ghanaians.

“The overall effect of this is that the effort of President John Dramani Mahama to permanently solve the long-standing power crisis is severely being undermined and the crisis in the supply of electricity is being deepened”, he noted in an urgent stated delivered on the floor of the House, Tuesday. Bykasapafmonline.com