The EC has also been handed 12 months to ensure relevant Legal Instrument backing election is put in place.

This is the order coming from an Accra High Court that has upheld arguments by 5 Ghanaians based abroad that the EC has caused an infringement of their human rights by failing to implement the law.

Passed into law in 2006, the Representation of People Amendment Act (ROPAA) was to allow citizens, including dual nationals, to be registered abroad and to vote from abroad. 11 years on, the Electoral Commission which is the implementing body has failed to operationalize the law forcing five Ghanaians resident abroad to drag the commission to the court saying their fundamental rights have been breached.

The 5 applicants are Kofi A. Boateng, Nellie Kemevor, Obed Danquah, Christiana Sillim and Agyenim Boateng, all residing in New York State and Kentucky in the USA, and are citizens by birth, dual citizenship, or both.

Through their lawyers led by Samson Lardy Anyenini, they argued implementation of such laws is not new.

They said the International Electoral Knowledge Network reports that there are 115 countries in the world, including 28 in Africa that have enabling laws for overseas voting, with Ghana singled out as a case of a country that has passed such a law but has not implemented it.

They also contended that it was discriminatory to allow only Ghanaians studying abroad and staff of Ghana’s Mission/Embassies abroad to be registered and vote from abroad.

They said countries such as Senegal, South Africa, Namibia, Niger, Mozambique, Cape Verde, and South Sudan either allow their citizens abroad to vote in presidential elections or are piloting the system.

Lawyers for the Electoral Commission represented by Baffour Gyasi Bonsu Ashia argued that it has plans to implement the law and should not be compelled to do so.

The Commission also challenged the process by which the Applicants invoked the court’s jurisdiction as wrong while insisting that the right to vote is not a human right. State Attorneys representing the Attonrey General (2nd Respondent) in court had at the start of the case told the court that they will associate themselves with arguments of lawyers of the 1st Respondent (EC) throughout the entire process.

Delivering the courts decision Justice Anthony Yeboah said it was outrageous and unreasonable for the EC to justify delay in implementing the law by stating challenges such as financial as the reason.

Justice Yeboah said “the EC self indulgently relies on recitation of challenges rather than find solutions”.

Justice Yeboah added, “the EC is poorer in terms of institutional capacity if it cannot find solutions to these challenges” 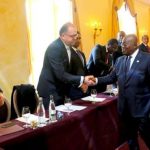 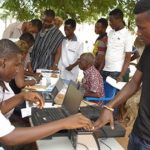