The Electoral Commission has announced that it has ended the nomination process and will soon conduct ballots for the four remaining candidates cleared to contest in the December 2016 elections.

Communications Director of the EC, Eric Dzakpasu who made this known said the ballot will determine where each of the candidate, John Mahama of the National Democratic Congress, Nana Addo Danquah Akufo-Addo of the New Patriotic Party, Ivor Greenstreet of the Convention People’s Party and an independent candidate, Jacob Osei Yeboah [JOY] will be placed on the ballot paper.

He said the EC is yet to come out with the appropriate date to conduct the ballots.

Ballot positions picked by the political parties at the national level would often be replicated at the constituency levels.

Presidential candidates had the option to be there in person or delegate their representatives.

Flagbearers who are able to successfully complete the electoral process for filing nomination papers are the ones that qualify to participate in the balloting.

Many of the affected candidates, including the National Democratic Party and the All People’s Congress, have threatened to sue the EC over the move 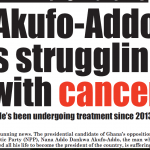