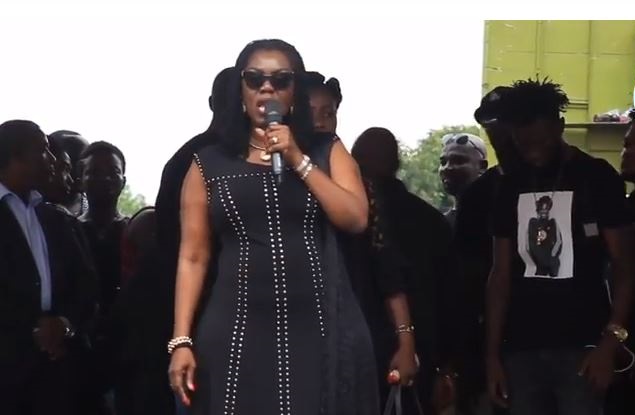 Contrary to assertions that Ebony Reigns was a bad influence and a burden to the society due to her risqué on-stage acts and suggestive performances, Communications Minister and Member of Parliament (MP) for Ablekuma West, Ursula Owusu-Ekuful has eulogized the late dancehall artiste for using her talent “to the glory of her maker”.

Ebony’s provocative dress code and sexual innuendos from day one instigated so much controversy but the dancehall diva could not be bothered as she continuously expressed her fashion sense and used double entendres as well as puns in her songs.

But speaking at an event to commemorate one week of Ebony’s passing, the legislator applauded the late musician for putting her talent into judicious use.

“She was blessed with talent and she used it to the glory of her maker,” said the minister. “We have lost a treasure. We have lost a beautiful talented human being. We have lost somebody who wasn’t afraid to express her individuality and didn’t care about what anybody said or thought about her. We can all learn something from the short life that she lived here.”

“What is the talent given you by God that you’ve hidden for fear of what people will say about you?” she asked while entreating all to “put [their] talent into fruitful use to glorify God.”

Ebony, known in real life as Priscilla Opoku Kwarteng, died in a gory accident on the Sunyani-Kumasi highway – a few days before she was scheduled to start a European tour.

A military officer and a female acquaintance identified as Francis Atsu Vondee and Frankie respectively, who were also on board the Jeep which clashed with a VIP bus died as well.

Ebony’s death led to a huge outpouring of grief and sympathies from music lovers, fans, colleagues, friends and politicians in Ghana.

The family has announced that she will be buried on March 17, 2018. Venue for her funeral is however yet to be communicated.