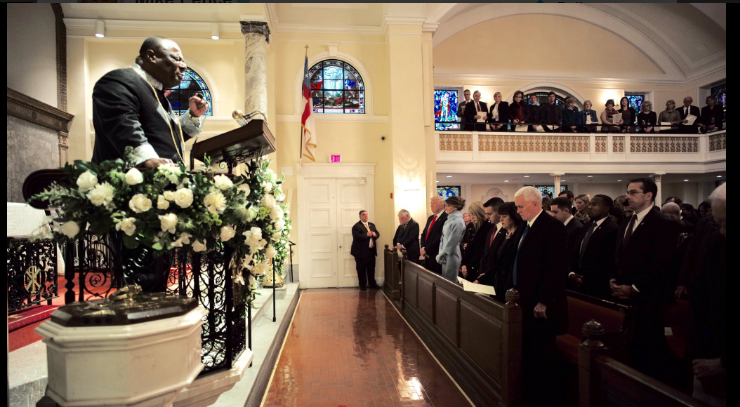 Archbishop Nicholas Duncan-Williams, the general overseer of the Action Chapel International Church, on Friday ministered at church service that preceded the inauguration of Donald J. Trump as president-elect of the US.

Archbishop Duncan gave a powerful prayer of success for the new administration, according to pictures by Vice-President Mike Pence on Twitter.

Trump, Pence and their families as well as several top US government dignitaries attended the service.

The feat has come as a huge surprise to many Ghanaians who did not anticipate that a Ghanaian pastor could be called upon to minister on an occasion as momentous as the inauguration of a US president.

The development has sparked excitement on social media, with many Ghanaians enthusiastically and excitedly sharing the pictures of what has become a moment of pride for the country.

Although Archbishop Duncan-Williams has ministered as several presidential inaugurations and high profile events in Africa, his performance in the US will no doubt boost his reputation as one of the foremost preachers of the world.

In a tweet, the Archbishop said he had been honoured to lead the prayer session at the service.

Meanwhile Trump has taken the oath of office and has been sworn in as the 45th president of the United States.