An Accra Human Rights court has ordered for the reinstated DSP Gifty Mawuenyega Tehoda who was dismissed from the Ghana Police Service 2012.

DSP Tehoda, a former head of the Commercial Crime Unit of the Ghana Police Service was in 2011 cited in a case that saw some cocaine exhibits turn into baking soda. She was, as a result, interdicted by the Service.

Though she was acquitted and discharged later by an Accra Circuit Court, the Service refused to reinstate her, forcing her to seek justice at the human rights court for wrongful dismissal.

The court presided over by Justice Gifty Adjei Addo today [Friday] March 31, ordered the Inspector General of Police (IGP) to reinstate her and pay all her salaries from 2012 in full.

According to a TV3 report, Mrs Tehoda was in tears after the verdict of the court. 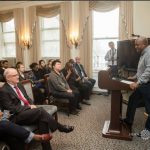