A drinking bar operator who bit off a neighbour’s ear during a scuffle at Amasaman has been fined GH? 1,200.00 by an Accra Circuit Court.

Doris Yeboah in default would go to jail for one year.

The court presided over by Mr Aboagye Tandoh also ordered Doris to sign a bond to be of good behaviour for two years or in default go to jail for six months.

The order came after the court had found Doris guilty on the charge of causing unlawful harm. Prosecution called three witnesses to make their case.

The court urged the complainant, Vicky Hamolda to seek the services of a counsel to pursue the issue of compensation.

This did not go down with the complainant who began ranting in court saying she has no money to secure a lawyer for compensation.

The case of prosecution was that both the complainant and the convict were neighbours residing in the same vicinity at Amasaman in Accra.

According to prosecution complainant used to be good friends but their relationship turned sour as result of petty quarrels.

On March 25, 2012, at about 4:00pm, complainant met Doris at a spot and she pulled her braided hair and that resulted in a fight.

According to the prosecution, in the process, Doris bit the left ear of the complainant. Complainant also bit the hand of Doris. Both complainant and convict reported the matter to the Police and they were issued with medical forms. 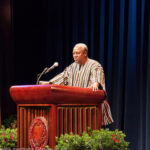