Former President Jerry John Rawlings hails from Dzelukope near Keta in the Volta Region – his place of birth automatically make his children ‘Voltarians’ – thus, all his children are eligible to vote in the Volta provided they are registered in the region.

But the daughter of former President, Dr. Zanetor Agyemang Rawlings has over the years been a registered member of the ruling NDC in Accra, specifically the Korle Klottey Constituency.

After serving the party and constituency diligently over the years, she is now in the party’s parliamentary race – but that was met with controversies from her constituency leadership.

Zanetor was nearly shelved with reasons that – she is not an active member of the constituency which happens to be NDC stronghold in the Accra.

However, the controversy was amicably resolved when Dr. Zanetor Agyemang Rawlings was cleared by NDC national executives to contest the party’s upcoming parliamentary primaries in the Korle Klottey Constituency.

In an interview with NEAT FM’s morning show Ghana Montie, the now parliamentary aspirant clarified why she chose to contest the Korle Klottey seat – “I am not registered in Volta region. I think issues would have been raised if I went to the Volta Region to contest, they would have said I don’t live in the region and I don’t speak their language, my polling station and all.”

“If we are raising such issues, let’s look at the fact of the matter.
Part of the reason why you are meant to be in a specific area is that, you know the problems of the area, lived there, registered there, speak and understand their language. That is my personal view. You must communicate with your people well,” she told Kwasi Aboagye. 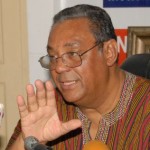