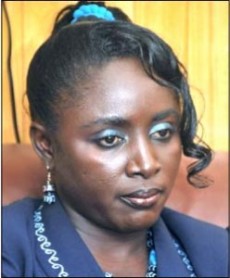 Dr. Louisa Hannah Bisiw, Deputy Minister of Food and Agriculture (MOFA), has called on voters to reward the government with their votes on November 7, for the massive infrastructure development within the past seven years.

She said they would be showing ungratefulness should they fail to return it to power in the coming general elections.

The Deputy Minister was speaking when she performed the ceremony for construction works to start on the 26-kilometre Techiman-Derma-Asuoso road in the Tano South District.

The GH?15.5 million project, is expected to be completed within 15 months and involves bitumen surfacing.

The job has been awarded to PMC Construction Limited, an Accra-based construction company.

Dr. Bisiw, who is the Member of Parliament (MP) for the area, gave high marks to the government for its achievements and warned that it would be a mistake to vote it down.

She said she had had personally sunk 69 bore holes in the constituency to provide the people with access to potable water, adding that, work on additional 18 was steadily progressing.

She also gave assurance that everything would be done to complete the GH?200,000.00 market project started at Techimantia.

Mr. Eric Opoku, the Brong-Ahafo Regional Minister, urged the contractors to make sure that they worked hard to meet the deadline.

They should again see to it that there was value for money by doing quality job, he added.

Alhaji Abdallah Ahmed Abdallah, the Chief Executive Officer of the Construction Company, pledged to finish the road within the contract period.