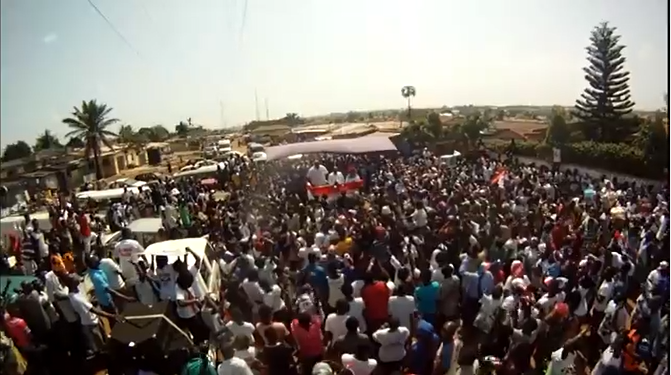 Cries “Someone Just Threw A Stone At Me, Why?”

The unending troubles in the New Patriotic Party (NPP) went a notch higher last Wednesday, when an unidentified person in the crowd at a party rally in Osu –Accra, hurled a missile at the opposition leader, Nana Akufo-Addo, as he addressed supporters, telling them to vote for him and his disputed parliamentary candidate, Lawyer Philip Addison.

Mr. Akufo-Addo, was on the second leg of his tour of the Greater Accra Region, which earlier took him to Alajo in the Ayawaso Central Constituency and subsequently to Osu Klottey Korle, where he was stoned by someone suspected to be an aggrieved member of the NPP on the side of ex-Constituency Chairman, Valentine Nii Noi Nortey.

The three-time presidential aspirant, had told party faithful of the need to vote out President Mahama, and the governing National Democratic Congress (NDC), following their alleged mismanagement of the economy, and to give him a chance to become president to reverse the hardship foisted on Ghanaians by the government.

But as the 72-year-old, who was visiting the Constituency for the second time, began to plead with supporters to also vote for the NPP’s parliamentary aspirant for the area, Philip Addison, he was compelled to pause his delivery, turned to complain to those beside him on the platform that someone had hit him with a stone.

“Someone just threw a stone at me, why?” he asked. But he quickly resumed his delivery, saying: “No problem, this is our politics in Ghana”, Nana Addo cried out.

“I would wish that when we are moving [to the Flagstaff House], you allow Philip Addison to come along with me. Our party, the party of the Elephant, we know of only one candidate for Klottey Korle. He is Philip Addison. We know of no other person. We go to primaries to elect someone before he can contest [on our ticket]. So please make no mistake – NPP is the only party capable of removing the NDC from power. No other political organisation in Ghana can do it.”

No one, has been picked up in connection with the incident and the rationale for the attack is unclear. The NPP’s front in the Constituency is divided, with the decision of Nii Noi Nortey to file to contest as an independent parliamentary candidate.

Mr. Nortey, had been declared winner in an NPP parliamentary primary on August 2, 2015, but the results, were annulled by a High Court, after Mr Addison, dissatisfied with the conduct of the poll, petitioned it.

A rerun of the primary was held on February 27, with the lead counsel of the NPP in the 2012 election petition winning the polls. But Mr Nortey, who felt hard done by the decision, filed to contest for the seat as an independent candidate.

Description by President John Mahama and some disgruntled members of the opposition NPP that, the 2016 presidential nominee, is very divisive, was plainly confirmed this week, when the 72-year old, told aggrieved members of the party to leave if they so wish.

Nana Addo’s clear case of intolerance and bad leadership quality, was recorded at Ablekuma West Constituency on Tuesday, October 4, 2016, during his tour of the Greater Accra Region, where Mrs. Ursula Owusu-Ekuful, is seeking re-election, after entering Parliament in 2012.

Nana Akufo-Addo, told party members at a rally at Shiabu Dansoman that “Our party selects leaders through internal elections. I, myself, was elected through such a process. True party people stay with the party whether they win or lose. My colleague Alan Kyeremanten, who I beat in our primaries, is still here with me. He even speaks on my behalf. However, if you lose internal elections and you get disgruntled and decide to leave the party, then you are not a true NPP member.

“So, if you say you are quitting the party, because you lost an election, we will say: ‘Thank you very much for your services, you go, we will stay and fight the fight and make the way to bring the victory to the NPP.’ We don’t give up, we don’t fret, come what may, we are solidly behind the Elephant.”

The NPP in the Ablekuma West is divided, following a decision by the party’s former chairman, Theophilus Tetteh, to contest the coming elections as an independent candidate, after he accused the incumbent MP of manipulating the party’s primaries.

Mr. Tetteh, and a good number of the executives in that Constituency, just like over 22 constituencies across the country, have resigned to campaign for their former chairman.

His remarks, has been received with dismay, though it confirmed repeated accusation that he is not a unifier like his predecessor, ex-president John Agyekum Kufuor , who in 2008 advised against the NPP picking people “who are full of tension”. President Kufuor, had preferred Alan Kyeremanten.

But on the same platform, ex-Minister of Information, Stephen Asamoah Boateng, openly disagreed with Nana Addo, by throwing an open invitation to Nii Noi to return to the NPP.

Acting General Secretary and National Organizer, John Boadu, later went on Joy FM, admitted people have left the party, but added they are being admonished to return.

“I think that yes, some of them are worrisome, some of them we have done our best to get them to see reason with no t taken or embarking on that political suicidal path,” a pain-filled John Boadu lamented.

Other less known party members and political observers, including a political science lecturer at the Kwame Nkrumah University of Science and Technology (KNUST), Dr Edward Brenya, have spoken against his comments.

Dr Brenya told Accra-based Class News on Tuesday: that “He (Akufo-Addo) is already being questioned that he is not the type that can unify people.
I don’t think that whatever has happened with Afoko, Kwabena Agyapong and others, should have happened if Nana Akufo-Addo, right from the beginning, had actually exercised a level of [commitment] to unify people.

He would have been able to handle it. NPP is not the first party to have seen these kinds of things that emerged, but what have we seen? …Other people were sacked in constituencies and it is going on and on. Now we have people that are going independent and the only thing you can tell them is ‘thank you because you are not patriotic’? What kind of leadership is that? …

He needs to look at the human side of issues and remember that winning elections is about numbers and you do everything that it takes to get the numbers to support you.”

Meanwhile, Mr. Tetteh, has lashed out Ursula Owusu-Ekuful for destroying the campaign of the party. He contends the actions and inactions of the MP, will lead to the defeat of the NPP.

He likened the legislator to the biblical Delilah, who seduced Sampson and ended up exposing the secret of his strength to the Philistine army leading to the downfall of the once strongest man on earth.

“If you find something fundamentally wrong with the election, and you go to court or you express your dissatisfaction in one way or the other, does that mean that you don’t respect people? Is it not the same Ursula Owusu-Ekuful, whose actions and inaction provoked the anger of Kennedy Agyapong to say that Gas and Ewes should be killed?

How long will the MP’s utterances cause the downfall of this party? I’m saying that she has been the Delilah and Nana Akufo-Addo is the Sampson in our body politic,” Mr. Tetteh said on Class FM.

The Herald, sources within the Constituency, have said there was an uneasy calm and tension in the Ablekuma West Constituency, prior to Nana Addo’s visit, as members of the party, vowed never to vote for Mrs. Owusu-Ekuful.

This according to sources, led to Nana Addo, spending the entire Tuesday in that particular area, even though he was billed to tour three more constituencies.