Embattled Businessman Alfred Agbesi Woyome has pointed out that he did not point a gun at the Attorney General to collect the GHC51 million judgement debt paid to him.

He added that he took the money through legal means and does not see why people are making a lot of noise about the payment.

The businessman who has been heavily criticised by the public for taking the money has been directed by the Supreme Court to re-appear on November 24, 2016 upon a cross examination application granted to former Attorney General Martin Amidu.

Addressing Journalists in Accra on Friday, Mr Woyome who claimed to have paid GHC4 million to the Attorney General accused the justices of the Supreme Court of erring in their judgement debunking claims that he will not pay the money.

He further accused the AG of frustrating his payment plan saying he will press on until justice is done.

‘I wrote it and the cheque has been paid and cleared, anybody who wants to know have the means to know, it is not faked, the number of people who are ready to help me, paid this money and they are angry, …the Justices of the Supreme court if they erred, they have erred because they were misled, and I will insist and press on it until justice is done, because this justice will be use on anybody, because it’s a precedent. The erroneous impression that I said I will not pay is not true,’ he explained. 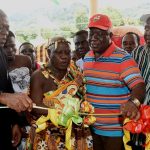 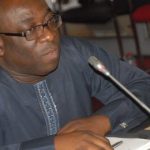