Elizabeth Sackey and NPP activist, Hopeson Yaovi Adorye, were accused of sending thugs belonging to the party’s Invincible Forces to ensure that, Ms Jennifer Dede Afagbedzi, who had twice been rejected, secure the mandatory two-thirds votes. This was done under bizarre circumstances including thuggery and over voting.

At Ada East, Sarah Dugbakie Pobee was declared third time lucky when her nomination received the endorsement of the assembly members after voting ended on last Friday, November 3, amidst violence by some NPP hooligans.

At the end of polls, she secured 27 out of 36 valid votes. But some assembly members have questioned her victory saying they were secured through foul means. This was after she failed on two occasions to secure the required two-thirds majority endorsement in earlier voting.

According to the Presiding Member, Aka Simon Kobla, he was physically assaulted by the thugs in the presence of the Deputy Minister and District Police Commander and dragged out of the hall.

Narrating how things unfolded during voting to Class FM, he said: “I saw many of them in black shirts, well built and claiming that they were National Security, but I said there was nothing for me to identify them by so they should be out of the room. They refused…I even told the Police Commander of Ada Division to take him out but he told me he cannot walk anybody out.”

He continued: “At the end of the voting when ballot papers were not sorted…they entered and they started beating me up, hitting me with the chairs that the people were sitting on and then dragged me until two of the policemen came to rescue me and I went and sat in a pickup for some time and then I came out and left. They were calling me to come and witness the counting, but I refused because they took the ballot box away and then they changed it.”

He said: “The Regional Electoral Officer went ahead to empty the ballot box and declared her [nominee] as the winner. I’m yet to know the exact figures; I didn’t sign any declaration form.”

He said their motive was to “declare the nominee at all cost that she must be the DCE for Ada, meanwhile, these Invincible Forces are not coming from Ada but they want to elect a DCE for Ada”.

According to him “they made away with the ballot box and about one hour’s time, they came with it, we were not there. Later we heard they declared the results themselves and said the nominee has won”.

A member of the Council of State, Nii Kotei Dzani has meanwhile condemned attacks in Ada East District by the Invincible Forces .

In a press statement, he solidarised with the victims of the “cowardly attack.”

“I was ashamed to view video footage of the incident, which clearly showed some police personnel standing idly by at the premises where the regrettable incidents took place,” he observed.

Mr. Dazni urged the Police Administration to take urgent steps to identify and bring to book those officers who abdicated their duties so publicly, which he believes will positively boost their public image.

“I charge all relevant security agencies to rise to their constitutional mandates and combat the creeping lawlessness in our midst, no matter the affiliations of the instigators of such violent occurrences,” he added.

in the case of the Madina, narrating how the fraudulent confirmation election process occurred to The Herald in an interview, Alhaji Fuseini Faila, said when the election was conducted, the nominee polled eight (8) ‘YES’ votes, out of thirteen (13) assembly members; whilst five people voted ‘NO’.

According to him, when the MCE nominee, could not secure the two-third majority votes, he then as the Presiding Member adjourned sitting of the day, in order to fix a different date for the election, since the nominee has another chance.

He indicated that, soon after the adjournment was made and seconded, some of their members, essentially those who voted against her, left the venue and were about going home. According to him, they received information that, the Coordinating Director and Deputy Greater Accra Regional Minister, had secretly ordered for another election for the eight assembly members, who voted in favour of the nominee.

By law and Standing Orders of the assembly, he said only the presiding member was mandated to call for such elections. However, the opposite was what transpired, as the powerful Deputy Regional Minister and Coordinating Director out of desperation, ordered the assembly members to appoint one of them to act as the PM.

Alhaji Fuseini Faila, said he as the substantive PM, quickly rushed into the venue, to attempt to stop the illegality, but at that point, the NPP thugs brought to the venue by Mr. Adorye, pounced on him.

He told The Herald that, sensing danger since his life was at stake; he called his colleagues to enter the hall and also take part in the election, knowing very well that the nominee will still not secure the required votes she would need to go through.

Interestingly, Alhaji Fuseini Faila, said after voting has ended and counting was done, the results turned out the same, eight ‘YES’ against five ‘NO’ again.

Shockingly, he said that, Mr. Adorye, who had no locus in the election, removed one of the blank ballot papers, thumb-printed it and put it in the box to be counted, since the nominee only needed just one vote to sail through.

The PM said, they swiftly objected to the development and drew the Electoral Commissioner’s attention that if he accepted that ‘outside’ vote, an over-voting would be recorded. But strangely, however, Alhaji Fuseini Faila, said the Electoral Commissioner out of political pressure, did not listen to him and his colleagues and went ahead to announce the results, thereby declaring the woman duly elected. 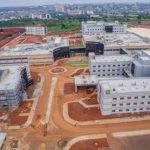