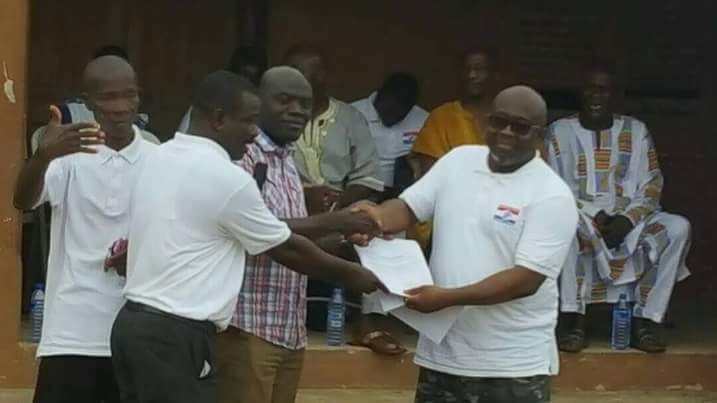 Though some important figures of the party were missing out, per the party’s constitution and if 3/4 of the crowd I saw represented delegates, then I should be right to conclude that a quorum was formed.

As one of the major events, the Hon. MP took time to outline some of his achievements for the six months he has been in office.

According to the Hon. MP, among the things he did include
√ sponsoring a polling station executive to learn “Computer” in China
√ superintending over the sucessful appointment and approval of government appointtees of the District Assembly, Presiding Member and District Chief Executive.

√ setting a concrete block factory
√ sponsoring our muslim brothers and sisters to go through their Ramadan fast …..

Through his speech, the Hon. MP disclosed that he won the elections because of the strategy he used. According to him, of all the places he excelled as a component leader, referencing MTN, GLO, GUINNESS, ARITEL… the strategy he used during the electioneering campaign was the best ever. He also passed commence to imply that ASW NPP is not glued together as a political family. He went to the extent of saying some party faithfuls are going about saying they are coming for their party.

On his part, the Central Regional Deputy Minister Agyei Baffour, ordered electoral coordinators whose electoral areas could not win a single polling station station
to shut up and stop parading themselves as if they were constituency officers for they were nobody. I was however shocked that a whole deputy regional minister failed to consider other factors that influence elections. Without the fear of being victimised, I want to state clearly that the comments of Agyei Baffour lack the spirit of leadership and should not be countenanced.

On his part, the second vice chairman of C/R NPP, Mr. K. K., encouraged the party faithfuls to rally behind the current MP. By all standard, he spoke as a discerning matured politician who has trained himself to build and mend broken political calabashes.

In sum, despite all the noted hitches I can say that except the unguided comments of Agyei Baffour, the conference was successful though most youth boycotted it.