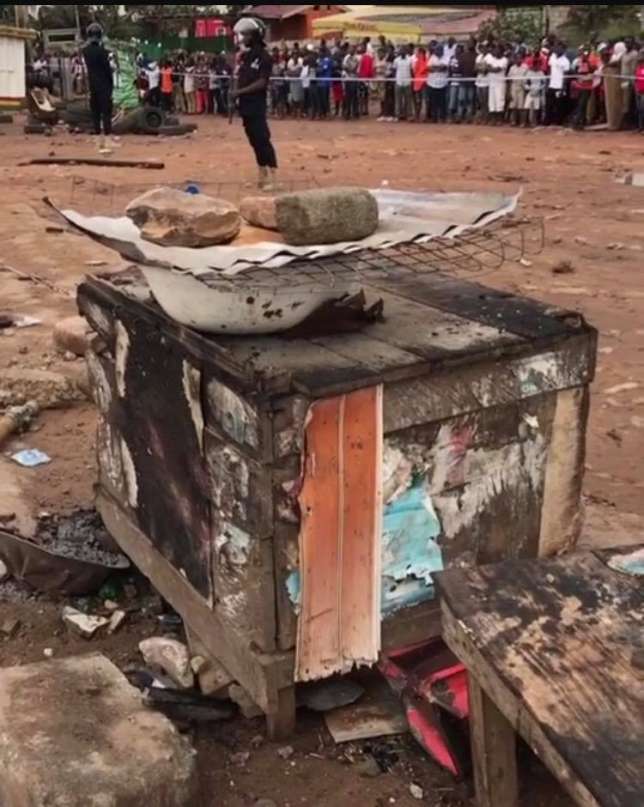 Dear Kojo Yankson,
I woke up to messages and posts saying the poor khebab seller located at Atomic Junction was to blame for the sad incident which occurred on Saturday, 7th October.

And when I asked these people to tell me the source of their information, most of them pointed me to a video on Joy FM’s page on Facebook, in which you, Kojo Yankson, explained what you called, “The Chronology of Events Leading to the Explosion”.

I watched the video and there are some issues I would like to bring to your attention.
1. For one, you started the video with a factual statement, “I am standing right next to the spark that set off the explosion”.
Now, to be honest, that is a really a heavy statement to make; to the best of my knowledge, no official report has thus stipulated how the explosion first started not to talk of pinpoint the location of the spark that started it.
2. Then you explained that you were standing by a khebab stand run by an “uneducated” man – why you would stress on his being uneducated is beyond.
Maybe it was part of your psychological conditioning of your audience to understand the point you were trying to make. But as a journalist, that is not your job; but more on that later.
play

3. Again, you made another “factual” statement, “the sequence of events is as follows”.
I really don’t know where you’re getting your “facts” from, but you sound like an eyewitness, which you never stated throughout the video, so I am guessing you were not. And this begs the question, “where did Kojo Yankson get his details from?”.
4. “Members of staff evacuated immediately” – Do you know what “evacuate” means?
To evacuate means to “remove (someone) from a place of danger to a safer place”, and per your “chronology” the members of staff of the gas station moved away from the leakage, they did not evacuate anyone.
5. Also, your whole reportage lacked what we call in the news industry “journalistic objectivity”.
Objectivity in journalism aims to help the audience make up their own mind about a story, providing the facts alone and then letting your audience interpret those on their own. To maintain objectivity in journalism, journalists should present the facts whether or not they like or agree with those facts.
And you didn’t deliver facts, and even those non-facts, you delivered them in the wrong way.

I understand we are all emotional about the lives lost and the damage caused by the unfortunate accidents, however, if as a journalist, you cannot present the facts without trying to steer the interpretation of the audience, then maybe you shouldn’t have run the report.
The classic idea of ‘objective’ reporting on anything is that the job of the journalist is to witness, analyse and leave the judgements and campaigns to others.
play
Kojo Yankson reporting on the Atomic Gas explosion for Joy FM (Facebook / Joy FM)

Of course, there’s no such thing as purely objective reporting, but it’s easy to spot journalism that isn’t. Sometimes the journalist will become involved and that can have a dramatic impact and that is what happened to you, Kojo Yankson.
But these are just my issues with the way you delivered your report – there are more qualms with the fodder of the report on the whole.
Factually, there is everything wrong with your report.

You never once mentioned how you came about your rather explosive conclusions, you never stated whether you heard it from an eyewitness or from an official report by the Ghana National Fire Service, NADMO etc.

To take words from Ace Ankomah, “With a ‘visible’ gas leakage, with a gas smell all over the place, and with people being evacuated, he insists on lighting a fire. So he (1) puts charcoal on the grill, (2) adds paper to it, (3) pours kerosine, (4) takes out a box of matches or a lighter, and then (5) starts a fire”, that is a perfect summary of your report.
But here is the part that you don’t put in your report – “when his fire connected with the gas and the explosions started, he had time to (1) gather all of his meat, oil, onions and pepper mix and accoutrements, (2) put out his fire on the grill, (3) place an aluminum cover over the grill, (4) place stones on the cover, and then (5) flee for dear life” – that is the part that makes no sense.

And come on Kojo, you stood by such a “neat” and “unpacked” and claimed that was the genesis of the explosion? Just take a closer look at the grill and take another look at your report and come out to issue an apology to Ghanaians and the khebab seller.
Your FAKE news has got Ghanaians who depend on us, journalists, for the facts, blaming and raining insults and curses on a poor chichinga seller.