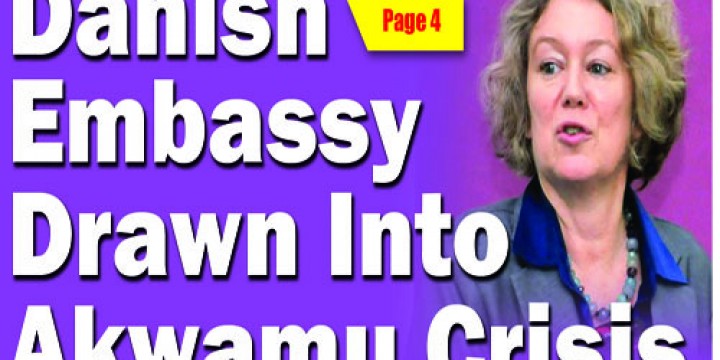 The Royal Danish Embassy, has been drawn into the Akwamu chieftaincy crisis with a warning not to grace the controversial Home-Coming being organized by the disputed Paramount Chief, Odeneho Kwafo Akoto III, alias Kwabena Owiredu and some of his friends.

The warning was contained in a letter sent to the Danish Embassy by lawyers for the Yaa Ansaa Royal Family, one of the claimants to the Akwamu Stool, which has been intercepted by The Herald.

The letter addressed to the Ambassador, Tove Degnbol by lawyers of the Yaa Ansaa Royal Family; Yaw Barimah & Co said, “our clients’ attention has been drawn to some attempt by a group of people led by one Mr. Kwabena Owiredu, who is parading himself as paramount chief of Akwamu under the stool name Odeneho Kwafo Akoto III to organize a “Home-Coming” Event in November or December 2017 in which You Excellency has been invited to participate”.

The letter signed by Lawyer S. Asante Bekoe, stated, “We are instructed to inform Your Excellency, humbly, that because of the an impending suit challenging the legitimacy of the afore-named Mr. Kwabena Owiredu at the National House of Chiefs, Kumasi, our clients who form the legitimate royal family in Akwamyu wishes to hereby advise that Your Excellency does not honour any invitation to any such event until the suit has finally been determined”.

President Nana Akufo-Addo and ex-President Jerry John Rawlings, ministers of state and other government functionaries, have earlier been warned to stay away from a fictitious ceremony being planned in the name of Akwamu Traditional Council by the disputed paramount chief, Odeneho Kwafo Akoto III .

According to the Yaa Ansaa Royal Family, which is challenging the legitimacy of the paramount chief, attending the event dubbed; Akwamu Home Coming 2017, slated for Friday, November 24 to Sunday, December 3, 2017, will be a gross disrespect to the National House of Chiefs, led by Togbe Afede XIV, the Agbogbomefia of the Asogli State.

The Yaa Ansah Family, through its spokesperson, Oheneba Kwesi Oppong, explained that an injunction has been slapped on Odeneho Kwafo Akoto III, from holding himself as the paramount chief Akwamu Traditional Area, hence debarred from organizing any social or traditional events in that capacity, until issues about his legitimacy, is resolved by the Judicial Committee of the National House of Chiefs.

They are aware that, Odeneho Kwafo Akoto III, is sending letters round to private and public institutions throughout the country and holding meetings soliciting for funds and other resources for the event, however, these funds are going into his private pocket, but not the Akwamu Traditional Council, as the donors are being made to believe.

The spokesman of the Yaa Ansaa Royal House, disclosed that search they have done at the registry of the Eastern Region House of Chiefs in Koforidua, confirmed that the Odeneho Kwafo Akoto III, lacks the capacity to celebrate an event in the Akwamufie in the name of the Akwamu Traditional Council.

According to him, the Eastern Regional House of Chief, has one Nana Yaw Boadu, as the Acting President of Akwamu Traditional Area.

Former President Rawlings is one such prominent individuals met by Odeneho Kwafo Akoto and invited to endorse and attend the event. The meeting took place at the official residence of the ex-President at Ridge in Accra.

Plans are also far advanced to get the Eastern Regional Minister, Eric Kwakye Darfour, also said to be working round the clock to have President Akufo-Addo, to grace the occasion.

Meanwhile, the Yaa Ansaa family, has warned the Okyenhene, Osagyefo Amotia Ofori Panyin, his wife and other relatives to stop meddling in the chieftaincy dispute, having already taken sides in the crisis.

The Okyehene, who heads the Eastern Regional House of Chiefs in May, this year, gave a judgment on the Akwamu chieftaincy dispute, which has been pending for over 25 years, declaring Odeneho Kwafo Akoto III, as the recognized and accepted Paramount Chief of Akwamu.

The decision has since been challenged by the Yaa Ansaa Family, with several processes filed at the National House of Chiefs.

The House, has since served the processes, including an injunction on Mr. Kwabena Owiredu, preventing him from holding any durbar at Akwamufie, but it appears he intend to hold the event regardless of the court order.

The Okyehene, is being accused of actively conniving with the Yaa Botwe faction in the Akwamu Chieftaincy dispute to violate the injunction placed by the National House of Chiefs on Mr. Kwabena Owiredu, from parading himself as the Paramount Chief of Akwamu.

Nana Afrakoma II, is also mentioned to be part of those planning to violate the orders from the National House of Chiefs based in Kumasi, which is soon to sit over the case to review the Okyenhene’s decision taken together with the Omanhene of the Akyem Bosome Traditional Area, Okotwasuo Kantamanto Oworae Agyekum III, and Nene Sakite II Kronor of Manya Krobo.

It was mentioned that on Saturday, October 28, 2017, the Okyenhene sent his wife to Akwamufie, where she pledged the Okyenhene’s support for the impending homecoming event being planned in violation of the House of Chiefs injunction.

The Okyenhene presided at the ruling, which is being challenged by the Yaa Ansah faction that obtained the injunction.

The Herald, has seen several petitions sent round the country warning each dignitary visited by the Odeneho Kwafo Akoto III, to ignore him and his Akwamu Home Coming 2017.

The police, have also been written to with respect to the petition to the National House of Chiefs and injunction slapped on the celebration by Mr. Kwabena Owiredu.

Oheneba Kwesi Oppong, is calling on all including district, regional and national authorities to let the rule of law prevail in the Akwamu Traditional Area for peace to prevail.