The attention of the National Democratic Congress (NDC) has been drawn to yet another series of false publications by the Daily Guide newspaper and which are being circulated as excerpts from the Professor Kwesi Botchwey Committee report.

The said reports, published on Tuesday September 19 and Wednesday September 20, 2017 by the Daily Guide are false, and are not contained anywhere in the report of the Professor Kwesi Botchwey Committee.

We have observed, rather sadly, that such deliberate publications about the NDC and especially the former President only come up when the Nana Akufo-Addo government has its back to the wall due to scandals or public agitation, this time arising from increasing fuel prices, increasing cost of clearing from the ports, negative fall outs from a poor implementation of the free SHS programme, public rejection of the attempt to rewrite the country’s history among others.

These are obviously more important issues the Daily Guide should be writing on instead of concocting stories about the NDC and its officials and publishing same. 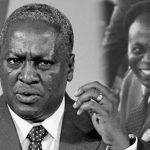