Ghanaian Sports Journalist Patrick Osei Agyemang popularly known in the football circles as “countryman songo” has been suspended by his media outfit Asempa FM, according to report.

Songo according to reports was handed an indefinite suspension after fairing at former Transport Minister Dzifa Ativor and EC boss Charlotte Osei.
http://ghanapoliticsonline.com
The outspoken Sports journalist lambasted the pair (Dzifa Ativor and Charlotte Osei) on his popular television show “Fire for Fire” for recent comments by the state personnels.

However his hash comments on the two seems not to have gone down well with the management of the Multimedia Group of companies who have suspended him until further notice.

Patrick Osei Agyemang who is known for his regular attacks on the Ghana Football Association and other Sports Authorities seemed to have shifted his focus from his domain by attacking the government officials.http://ghanapoliticsonline.com

Meanwhile the Multimedia Group is expected to release a statement on their latest decision on the Sports Broadcaster.

The Ghana Football Association months ago banned the journalist from conducting any interview with an FA member. 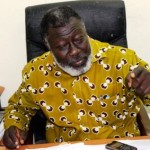