According to TB Joshua, the fearful Coronavirus which has caused fear and panic in the world will disappear the same way it came. During a live telecast on the popular Christian Tv Channel known as Emmanuel TV owned by Nigerian Prophet, TB Joshua,the man of God declared that the fearful virus plaguing the world will end on 27th March 2020.

Recall that in the early month February, news about a deadly incurable disease known as Coronavirus went viral across the globe. So far about thirty countries have reportedly been affected by the deadly disease.

So far, there has been no scientific cure for the virus but there has been public education on how the virus is transmitted and most countries across the globe are taking the necessary precautions which includes thoroughly scanning people who enter the country and also wearing of nose masks and gloves.

Well, as stated earlier, Prophet TB Joshua who is the founder and leader of the Synagogue Church of all nations otherwise known as SCOAN has declared that the virus will end on March 27th 2020. 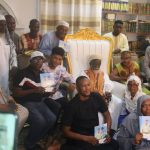