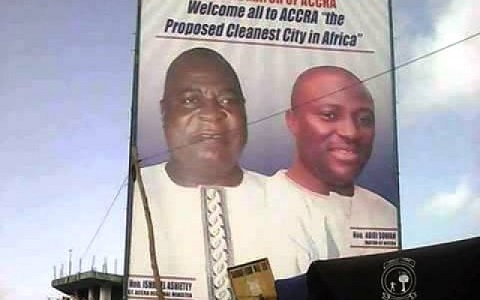 Billboards that had images of the Mayor of Accra, Mohammed Sowah Adjei and the Greater Accra Regional Minister, Ishmael Ashitey have been brought down following a barrage of social media criticism.

Earlier this week, a photo of one of the billboards was shared widely across social media. The billboards had the inscription ‘Welcome to Accra, the Proposed Cleanest City in Africa.”

It follows a promise by President Nana Akufo-Addo that by the end of his four-year term, the city of Accra should be the cleanest city on the continent. The president made the comment at a durbar held in his honour in Jamestown.

Many on social media criticised the move as being unnecessary and that the Accra Metropolitan Assembly (AMA) needed to be focused on actually getting on the ground to clean up the city.

The billboards emerged around the same time there had been reports of heaps of rubbish being dumped on unapproved sites across the city. It is unclear if the billboards were sponsored by the AMA or by private individuals.

The immediate past mayor of Accra, Alfred Oko Vanderpuye, also faced heavy criticism for billboards erected in his honour.