Some senior staff members at the health facility are protesting against his leadership citing irregularities in the appointment process.
During a visit by Citi News to the health facility, various blocks at the premises had been plastered with banners and posters with the inscription “Aluta…The Imposition of Anaba, a recipe for chaos at the Ridge Hospital; Anaba is not welcome at Ridge…SROF Man of great vision for Ridge”.
Although initial efforts to get authorities at the Hospital to comment on the matter proved futile, one senior staff who spoke on condition of strict anonymity, said the appointment of Dr. Thomas Anaba, followed a series of processes including the advertisement of a vacant post, shortlisting of candidates and interviews, hence, he does not understand what the qualms of those leading the campaign are.

He further explained that, Dr. Srofenyoh, the acting Medical Director of the Ridge Hospital, whose name was abbreviated on the posters as “SROF” and referred to as the ideal man for the job, was part of the shortlisted candidates who went through the interview.

Dr. Srofenyoh however lost the position to Dr. Thomas Anaba, who was the head of the Medical School at the University for Development Studies (UDS), Tamale.

The senior staff member who spoke to Citi News said he suspects those against Dr. Anaba only feel comfortable with Dr. Srofenyoh, who has worked with them over a period of time.

He however insisted that those leading the campaign are just a minority of the senior staff members.

He said he believes Dr. Anaba who was once at the Ridge Hospital before being transferred to the Tamale Teaching Hospital, is equally competent for the job.

Despite the posters and the murmurings at the health facility, all workers were going about their duties smoothly at the time of Citi News’ visit. 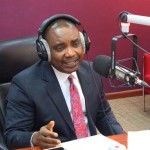