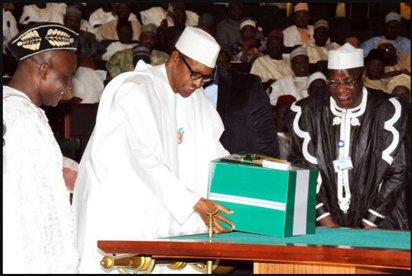 ABUJA—A web of conspiracy was, yesterday, being woven around the circumstances that led to the disappearance from the Senate, of hard and soft copies of the 2016 Appropriation Bill presented to the National Assembly last December.

The absence of the budget document, it was learned, led to the failure of the Senate to commence formal deliberations on the budget yesterday.

The controversy was further stoked at a closed-door session of the Senate where the issue reportedly split senators along partisan lines with Peoples Democratic Party, PDP senators accusing Presidency officials of conspiring with the National Assembly bureaucracy to steal the budget document.

Following the closed-door session, President of the Senate, Senator Bukola Saraki proceeded to the Presidential Villa where he met President Muhammadu Buhari supposedly on the issue.

PDP senators who accused the presidency of silently withdrawing the budget to revise down supposedly outrageous items in the budget bill were last night locked in a meeting where they were believed to be discussing the issue. File: Buhari during the 2016 budget presentation to the National Assembly.

The air of confusion and controversy in the Senate was, however, totally lacking in the House of Representatives as it was confirmed that the budget document was available and would be distributed today.

Confusion in Senate
Senators returning from the Yuletide break were said to have been engrossed in speculations over the missing budget document before commencement of sitting yesterday. Speculations were fuelled by the absence of the second reading of the appropriation bill on the order paper of yesterday.

Reportedly feeling the pressure on the issue, the Senate President called for a closed-door session immediately after opening prayers at 11.11 a.m.

The closed door session lasted for about 90 minutes, during which Senate Leader, Ali Ndume, was said to have drawn the attention of Senators to what was termed a developing story around the Budget 2016 document.

According to sources, the Senators were told that the official document as presented by the President could no longer be seen.

On hearing that both the soft and hard documents of the budget were missing, angry senators promptly called for investigation into the matter.
Minority Leader, Senator Godswill Akpabio was said to have expressed annoyance over the way and manner such an official document was handled by National Assembly officials and he was said to have immediately thrown his weight behind calls for interrogation of key members of the National Assembly bureaucracy to get to the root of the embarrassing situation.

An inside source in the Senate leadership, however, expressed reservation on the outburst of Senators at the closed-door session, saying:“How can they claim ignorance of the disappearance of the document now? The Presidency could not have moved into the National Assembly to take the document if no deal was struck with the leadership of the National Assembly. We have always heard that there was a plan to delay the budget to allow the executive arm of government sort itself out. They (Senate leadership) are now acting funny since it has been exposed that the budget is being delayed to allow the Presidency effect necessary adjustments in the budget proposal.”

Meanwhile, apparently learning that what happened in the closed-door session had leaked to journalists, Ndume suddenly came out to renounce insinuations of a missing budget.

“Saraki’s visit to the Villa is for Senate to know the President’s priority; we want to see how we can fast-track passage of the budget before end of February. What is before the Senate is proposal; once the President signs it, it cannot be amended, we can turn the budget upside down, it cannot be missing, “ Ndume insisted.

Ndume’s assertion was, however, quickly rebuffed by another senator who described the act of the missing 2016 budget as a clear theft.

The Senator who noted that it was a national embarrassment to the country, said: “This is hypocrisy on the part of government. We were surprised that a document like the budget of a country could be declared missing. It is a big embarrassment, with the fanfare that greeted the presentation of the budget to the National Assembly by President Muhammadu Buhari, the government presented a picture that it was serious and ready.

“The soft and hard copies are missing under circumstances that are still shrouded in mystery. The executive and management of National Assembly colluded. It is against parliamentary procedure. Once you present a bill to the Senate, it is now the property of the National Assembly.

“To take the document outside NASS is a national embarrassment. What happened is wrong, they could still have done the adjustment, after all, it is still a bill, instead of stealing it. Maybe there is something there they do not want Nigerians to know. It is a clear case of theft, they should let the world know when next they are bringing it.”

Dismissing the confusion in the Senate yesterday, Senior Special Assistant to the President on Media & Publicity, Mallam Garba Shehu said the President did not withdraw the budget even as he noted that hundreds of the budget document had been shipped to the two chambers of the National Assembly.

“Nobody, except the President can withdraw the budget and as far as we know, he hasn’t done that.

“The copies in their hundreds have been delivered to both chambers of the National Assembly.

“By tradition, once the budget is submitted, it ceases to be our property. Enquiries as to where it is should be directed to the appropriate quarters,” he said.

The House of Representatives was, however, far removed from the controversy as it was learned last night that the budget document was available in the House.

House spokesman, Abdulrazak Namdas said yesterday: “As far as the House of Representatives is concerned, there is nothing like missing budget. As from tomorrow, by the grace of God we shall begin to distribute copies of the budget to members for deliberation.”

Also, PDP senators were at press time holed up in a meeting in the residence of Deputy Senate President, Senator Ike Ekweremadu.

It was also gathered that the matter will come up today in form of a motion and would be referred to the Senator Samuel Anyanwu-led Committee on Ethics, Privileges and Public Petitions.

Spokesperson for the Senate, Senator Aliyu Sabi could not be reached for comments. Neither the chairman of the Senate Committee on Appropriation, Senator Danjuma Goje nor Senate Presidential Liaison Officer, Senator Ita Enang could be reached last night.

It would be recalled that President Buhari had on December 22, 2015 presented a total budget of N6.08 trillion for 2016 to a joint session of the Senate and the House of Representatives.