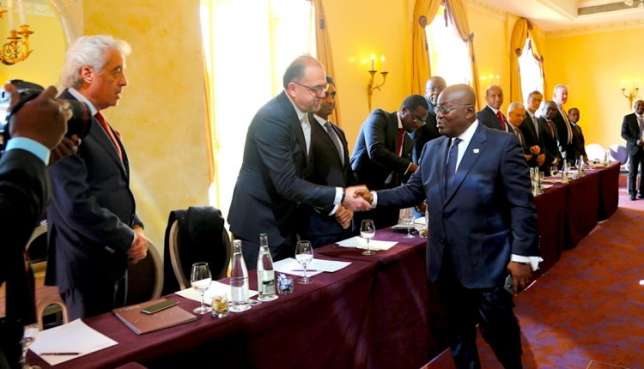 The Trade Ministry has conceded that some expatriate businesses that sat close to President Akufo-Addo during the recently held Ghana Expatriate Business Awards in Accra paid monies to earn proximity to the first gentlemen.

Asawase MP Muntaka Mubarak was the first to blow the whistle on what he viewed as illegal charges imposed on the businesses by the trade ministry.

According to Mubarak, the Trade Minister sold access to the president at US$ 100,000 during the awards held on December 8 at the Movenpick Hotel in Accra.

The Minority Chief whip provided a document signed by the deputy Minister for Trade and Industry Carlos Ahenkora dated 23rd October 2017, demanding Business executives who would want to sit in a round table with the president and have exclusive access to pay US$ 100,000

In a furious reaction however, the trade ministry in a statement accused the MP of telling lies and playing politics with his claims.

“The Ministry of Trade and Industry has learnt with disdain the baseless allegations flying in the media (including social media platforms) that the Ministry charged expatriates between 25,000 and 100,000 dollars to offer them seats close to the President at the recently held Ghana Expatriate Business Awards (GEBA).

But speaking to Francis Abban on the Morning Starr Monday, spokesperson for the Trade Ministry Prince Boakye said even though monies were paid by the businesses, it didn’t influence who picked an award on the night.

“I’ll be a hypocrite to say that there were others who sat at the table with Nana Akufo-Addo and did not pay. As a platinum sponsor, you had to fulfill some obligations. If an event organiser decides to tag a category of an event as a Presidential Circle, I don’t think there is anything wrong with that,” he said.

He continued: “The government partnered the Foundation so that the Private sector will know that the government is in full support of the event. We wanted to make sure that monies paid did not influence who won an award. The monies were paid into the Ministry of Trade and Industry (MoTI) account because we didn’t want post-event challenges. Mr. Saeed Fakhri , CEO of Dream Realty and Inesfly also paid $100,000 to sit at the table with the President. However, he paid and won on merit. In all the speculations and allegations going round, we are happy that the Ministry and organizers are not fighting. Nothing untoward went on during the event. Winning an award was not based on the highest bidder. There were some companies who did not pay anything but won awards”.