Details emerging from the Northern Regional Office of the New Patriotic Party has it that, NPP Northern Regional Chairman Bugri Naabu “confessed”, he gave the party’s flagbearer Nana Akufo-Addo Ghc 100,000 “few moments” after he benefited Ghc 500,000 from brother of Ghana’s President, Ibrahim Mahama,  a close source has stated.

Speaking to this newspaper over development surrounding this bribery allegation, a high placed sourced at the offices of the NPP Northern Regional Office observed that, after a meeting with “high profiled persons” in the region which was to “unravel the veracity” in this so called bribery allegation, a “conscious” Bugri Naabu admitted to the wonder of persons present in the meeting, how he gave Ghc100,000 from the so called bribe amount of Ghc 500,000 to Akufo-Addo. According to our source, Bugri revealed in the meeting that, a former Foreign Minister and former Member of Parliament for New Juaben as well as Honorable Osafo Marfo are “witnesses” to this “transaction” that ensued between him and Akufo-Addo.

Similarly, another source established that, Bugri Naabu indicated to elders of the NPP in the Northern Region that, Nana Akufo-Addo had “crave his indulgence” to raise money “as much as he can” from “reputable businessmen” in the Northern Region to support the 2016 campaign of Akufo-Addo in the region. In fact, Bugri Naabu according to sources, “placed his hands in his chest” when he told the meeting that “Nana Akufo-Addo cannot say he won’t defend me. No he cannot because he has assured me of his personal defense of me should anything happens, unlikely.”

It has been said that, Tuesday’s press conference which was addressed by known and very close associates of Akufo-Addo such as Akufo-Addo’s 2016 campaign manager Peter Mc Manu, Campaign Aide to Akufo-Addo- Musah Superior, and Spokesperson for Akufo-Addo- Sheik Mustapha Abdul Hamid “lends credence” to the claims of Bugri Naabu about Akufo-Addo. Not only this, indeed, Akufo-Addo after his encounter with Peace Fm’s Kwame Sefa Kaye on the “Kokrooko” flagship on the morning of Friday December 2 2016, he “hurriedly and eagerly” jumped to the defense of his “co-conspirator” when he took to his twitter account yesterday at 3:07pm “Bugri Naabu told me that he kept the money for proof and that he is going to return the money.” Many have questioned Akufo-Addo’s conscience and legal status regarding his “deliberately dishonest” understanding of BRIBERY and CORRUPTION. What other people have asked curiously is that, Why would Akufo-Addo act on wicked concoction of untruths and baseless allegations from “uncouth” close confidants of his such as, Bugri Naabu to hound and sack NPP National Chairman Paul Afoko, Kwabena Agyepong etc; but Akufo-Addo in his right frame of mind, has gotten the temerity and scruple to defend Bugri Naabu in the abundance of incontrovertible evidence and proofs of bribe taken, enough to hang Bugri?

Meanwhile, an avowed “trusted friend” of Akufo-Addo,  Abdul Malik Kweku Baako Editor-In-Chief of the New Crusading Guide has pooh-poohed the fictional and unintelligent claims of Bugri Naabu and his partner in crime Akufo-Addo, by describing it as “inconsistent” and “doesn’t make sense”. Kweku said “If someone wants to bribe me, I won’t take the money and deposit it into my account, I won’t take the car and transfer it into my name then 3weeks down the line say someone is trying to bribe me. It is inconsistent, it doesn’t make sense!” 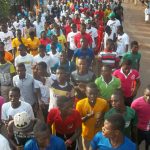