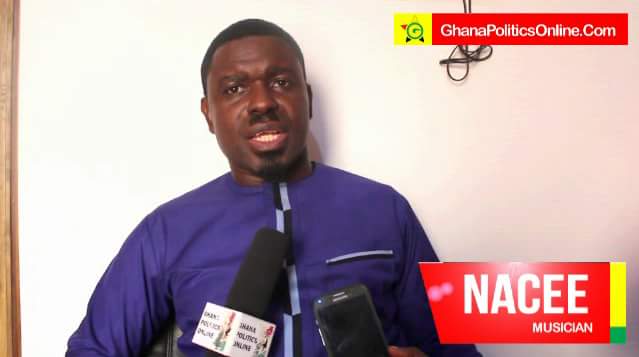 Ghanaian male musician Nacee has revealed that he composed ‘Onaapo’ and not Dee Aja. ‘Onaapo’,

the National Democratic Congress’ (NDCs) campaign song, has undoubtedly become a hit song with both members of the two major political parties singing and dancing to it anytime it’s played.

Controversial musician, Sydney has even composed a remix of the song to mock the outgoing President, H.E John Dramani Mahama.

Nacee had earlier denied composing the song but speaking in an interview , Nacee said, he composed the song and not Dee Aja. According to him, he wrote the song and contracted Dee Aja to sing it because,

”I wanted to provide a platform for him as an upcoming musician,” he added. He described Dee Aja as ‘’ungrateful’’ adding, ”I can even stop him from performing the song at any event including the ongoing Citi FM’s Decemeber2Remember.”  Nacee further revealed that he was contracted by the outgoing NDC to compose a song for them and other commercials but failed to disclose the amount. He also debunked claims by Dee Aja that he was not paid for performing the song. Nacee stressed on the show that he was not bitter at the success being chalked by Dee Aja with song, but felt he [Dee Aja] could have been more reasonable and shown appreciation by informing him [Nacee] of any of such performances. Dee Aja was recently invited to an event in Nigeria where he did a rendition of the song. The event was held in honour of President Mahama.