The 2012 presidential candidate of the Progressive Peoples Party (PPP), Dr Papa Kwesi Ndoum is of the view that a Citizens’ Complaint Centre is not the solution to Ghana’s corruption.

He said if the president is ready to wage war on corruption then the constitution must be followed which includes the declaration of asset by high public office holders.

The move according to the President was to actively involve Ghanaians in the fight against the canker.

He argued that during former president Kufuor regime, an office of accountability was set up but did not last.

“In president Kufuor’s time, there was a group set up, office of accountability, it came and went away. I’m just saying to you that anything that any president or administration puts in place, I hope it succeeds but you can’t live on hope.”

He suggested that some concrete measures must be put in place to deal with corruption instead of establishing offices which are unable to achieve the purpose to which they were set.

“For me in dealing with corruption if certain elements are not there, it will not succeed. Presidents of the Republic must make personal commitments against corruption. There are certain things that are defined for us by our constitution. Any one of us who go into public office at the high level are supposed to file an asset declaration with the Auditor-General, which is a secret today. I’m saying a personal commitment should make any president decide that I will make those documents available and open to the public,” he added. 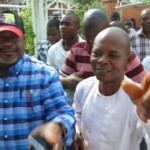