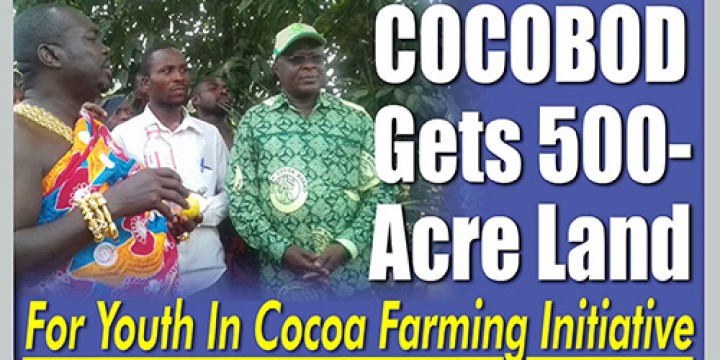 or Youth In Cocoa Farming Initiative

A chief in the Eastern Region, has given out vast tract of land to the youth in his area, and non-indigenes, who have interest in the cocoa sector, but are hindered by lack of land.

The gesture by Nana Kwame Berma Anim II, Chief of Krodua in the Upper West Akyem District, is in fulfillment of a promise he made last year to give out some 500 acres of land belonging to the Asamankese Stool to support Ghana Cocoa Board’s “Youth In Cocoa Farming Initiative”.

It is an ambitious programme to introduce young and energetic limbs into the cocoa business; a sharp departure from the aged and frail-looking cocoa farmers.
The initiative is being spearheaded by the Chief Executive Officer (CEO) of COCOBOD, Dr. Stephen Kwabena Opuni, to ensure the sustainability of the cocoa industry, through massive involvement of the youth into the sector.

Krodua, has a population of about 6,000 people with over 400 of them being cocoa farmers. It will be a major boost to cocoa production in the next few years, when the youth heed to the call.

At a ceremony last Saturday to mark Ghana’s version of Valentine’s Day; National Chocolate Day (NCD) at Krodua, Nana Anim II, regretted the growing spate of young people rushing to the towns and cities to seek for so-called greener pasture, when there is enough they can do for themselves in their villages by venturing into cocoa farming to better their lives.

Nana Anim II, who did not mince words, said the time has come for all the youth who have traveled far and near to return home and accept the challenge to go into cocoa farming, as it is the surest way to live a fulfilled life.

“There’s opportunity to go into cocoa farming. There’s enough land”, he stressed and argued that, “there is no cocoa farmer, who is poor and children of these farmers are supported with scholarship to further their education”.

Nana Anim II, who had the rapt attention of his subjects at the durbar, pleaded, “Don’t go and waste your time in the cities. It pains me when I meet these young ones in the cities struggling to make ends meet when back home, there’s enough land lying idle”.

He said, since the promise, some of the youth, have been trooping to his palace seeking to be beneficiaries of the land.

Receiving thunderous applause from his subjects, he explained that, cocoa farming has been made attractive and modernized adding; “now you don’t have to look at the weather to farm, because rivers like Ayensu still exist for irrigation”.

COCOBOD, plans giving out some 60 million hybrid seedlings to farmers beginning next month, and in the Eastern Region alone, the regulator has 331 nursery sites, as against 80 last year. The seedlings are going to be giving out free of charge.

There will also be the annual free mass cocoa spraying exercise, free fertilizer, and other farm inputs all at the disposal of every farmer.

In a statement, a Deputy Chief Executive Officer (CEO) of COCOBOD in-charge of agronomy and quality control, Dr. Francis Oppong, commended farmers for their enormous contributions towards the sector, which serves as one of the major pillars of Ghana’s economy. He also extended the Boards gratitude to Nana Anim II and asked that, others emulate his kind gesture.

Dr. Oppong, said as part of President John Mahama’s commitment to boost cocoa production, critical interventions, have been initiated by COCOBOD, one being the Youth in Cocoa Farming programme.

He described the initiative as crucial, because most cocoa farmers, have aged and need to be replaced with the youth. He revealed that as a result of this, COCOBOD since 2014 intensified its efforts at encouraging the youth to see cocoa farming as “a lucrative business rather than a way of life”.

Speaking under the theme, “Youth in Cocoa, Sustainable Cocoa Production” Dr. Oppong, explained that as part of the initiative, “Young cocoa farmers are being supplied with free high-yielding, early bearing hybrid cocoa seedlings, fertilizers and other farming inputs across the cocoa growing regions”.

To ensure transparency and fairness in the distribution of the agro-inputs, various district taskforces (with expanded membership to include representatives of security agencies), are being inaugurated in all the cocoa growing regions.

COCOBOD, also used the durbar to educate the cocoa farmers on good agronomic practices, strongly featuring were, quality control, prevention of bush fires, choosing of lands, storage of cocoa beans and many others.

Young cocoa farmers from parts of the country, who have over the period excelled, spoke about their experiences and encouraged others to take the giant step.

After the durbar, Nana Anim II led the COCOBOD team, to inspect the lands which are very close to the town.