The Chief Justice, Her Ladyship Georgina Theodora Wood is appealing to the public to still have confidence in the judiciary after the infamous Anas Aremeyaw Anas video exposed how some judges and judicial service staff took bribes and subverted justice.

Since the Anas expose on corruption in the judiciary, some Ghanaians have declared that they will never go to the courts and seek justice again.

But Her Ladyship said in spite of what the video contained, the courts are still willing, able and ready to deliver justice to the public so people should still have confidence in the court and take their cases to the courts for justice.

Her appeal was contained in a speech read on her behalf by Justice Dennis Adjei at the commissioning of a new Circuit Court at Awutu Breku in the Central Region today.

The Chief Justice also noted that no one in Ghana is above the law and so any judge who is found to have committed wrong will be dealt with according to law, just like any other person.

“We gave power to Parliament to come out with laws and those laws are supreme because Ghana is under rule of law so no judge is above the law,” she said.

Her Ladyship Georgina Wood appealed to Ghanaians to desist from the attitude of settling criminal cases at home instead of seeking justice in the law courts.

“The minimum sentence for rape is five years and the minimum for defilement is seven years so if you settle such cases at home you make the criminal go scot-free and that encourages others to commit such crimes – we must let the law take its cause,” she said.

The CJ also urged the Awutu Senya DCE to welcome the new judge who will be sent to the newly built Circuit Court and provide him or her with a bungalow so that he or she could dispense justice with a sound mind. 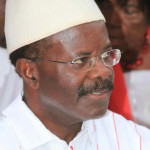