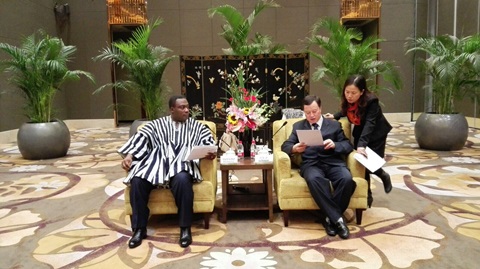 Liaoning Huanghai Automobile, the import and export wing of SG Automotive Group, located in Dandong City, Liaoning Province, China, manufacturers and suppliers of the recently acquired 116 state of the art city buses by the Mahama administration, has praised the Ghanaian government for keeping to their side of the contract in general, and specifically the prompt and timely manner in which payment was effected. Mr. Liu Yong, Managing Director of the company made this remark when the Deputy Ambassador to China, Horace Ankrah paid a two day working visit to the company to��familarise himself with the operations of the company.
According to Mr. Yong, this singular act of the Ghanaian government of keeping to the contract will have positive economic implications for Ghana as it will increase investor confidence in doing more business with the country. He went on to say that his company is happy to always do business with the

Mahama government and hope that the remaining 64 buses will be delivered by April 2016 as promised. Diana Mao, Head of Group Global Strategy of the company, said the Ghana government has made the right choice of city buses and hope that the government of Ghana will continue with its impressive way of doing business with SG Automotive Group, thereby increase the bilateral co-operation between China and Ghana. Mr. Ankrah assured them that it is the determination of the NDC government to modernise and improve the transportation sector to the expected level for a country like Ghana in the 21st century.

The Deputy Ambassador assured them of the government’s continued commitment and hope that they will reciprocate by offering Ghana good deals.
Mr. Ankrah charged the company to establish a good relationship with the Ghanaian Embassy in Beijing. At the request of the Deputy Ambassador, the company promised to donate a mini-bus to the Ghanaian Embassy in Beijing in April 2016.