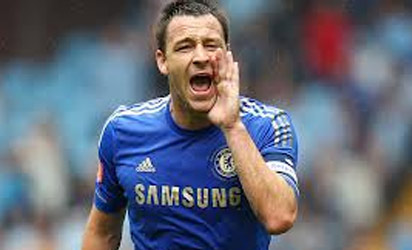 Chelsea captain John Terry may yet be offered a new deal despite having announced his departure from the club, a spokesman for the Premier League champions said.

Terry, 35, announced on Sunday that he will leave Chelsea when his current deal expires at the end of the season because the club have not offered him a new contract.

But a Chelsea spokesman said late on Sunday: “John requested a meeting with the club the week before last. In that meeting he asked about the possibility of an extension to his existing contract.

“John was advised that while no new deal was currently on the table, that situation could change in the coming months. The club has the utmost respect for John and everything he has helped us achieve to date.

“He is a fantastic servant of Chelsea Football Club and a superb captain and, as such, the club will keep the channels of dialogue open.”

Terry, who has made 696 Chelsea appearances and is the club’s most successful captain, had expressed disappointment that there would be “no fairytale ending” for him at Stamford Bridge.

His former team-mate Frank Lampard paid tribute to the ex-England captain, posting a picture of the pair on Instagram accompanied by the simple caption: “#captain #legend #chelsea #winner @johnterry.26”

Terry’s current central defensive partner Kurt Zouma was shocked by the news and suggested that it would be hasty to jettison him.

– No Wenger interest –
“I am very surprised. I didn’t know,” the France international told the Evening Standard newspaper. “Now we have to see what John wants to do because I think he can play for another one or two years.

“This feels like when we lost Didier (Drogba) last summer. (Terry) is a huge personality at Chelsea. When you lose these kind of players, you have to replace them, but I don’t know how John can be replaced.

“For me he can play many more times. He is still at a top level. He has been playing very well since I arrived at Chelsea. He can continue for sure.”

The prospect of Terry leaving has also dismayed the club’s fans, for whom he is an emblematic figure.

Trizia Fiorellino, chair of the Chelsea Supporters Group, told BBC radio: “It seems a very strange time to do it and given that we’ve got no manager at the moment — we’ve got an interim manager (Guus Hiddink) — who has made this decision for John Terry to go?

“He played every minute of every league game last season and we won the title. It’s just all very peculiar, very strange, and I think the club owe us an explanation.”

Arsenal manager Arsene Wenger signed goalkeeper Petr Cech from Chelsea last year, but he ruled out a move for Terry, who had said in any case that he would not be joining another Premier League club.

Asked if he was interested in signing Terry, Wenger said: “No, because he is at the end of his career and he has spent his career at Chelsea. If he wants to play longer, I am sure he will play for Chelsea.”