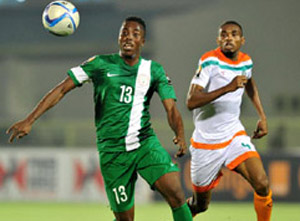 The Super Eagles yesterday annihilated the Mena of Niger 4-1 in a blistering second half display that saw Abia Warriors striker, Chisom Chikatara bag a hat-trick. By this victory, the Sunday Oliseh tutored team went top of Group C after the opening game between tournament favourites, Tunisia and Guinea ended 2-2.

Goals from Osas Okoro opened scoring in the 46th minute before a Chisom Chikatara hat-trick sealed the win for the Eagles.
Prince Aggre had the Eagles first chance less than one minute into the game but his low shot was gathered by Alzouma Inoussa in goal for Niger.
In the seventh minute Idrissa Garba tried to lob the ball over Ikechukwu Ezenwa but his effort was stopped. The Eagles went close again after a nice build-up, but Okoro shot wide from the edge of the 18-yard box. Okoro eventually opened the scoring inside 30 seconds of the restart off an assist from Tunde Adeniji.

The Eagles made their second change following the introduction of Chisom Chikatara for Adeniji on 58 minutes.

In the 69th minute, the Eagles had a break away, but Aggreh’s poor cross was cleared away.
Usman Mohammed was introduced for Ibenegbu for the Eagles final change.

Chikatara doubled the Eagles lead on 74 minutes after taking the ball on his chest before unleashing a right-foot shot which flew pass Niger keeper.

Adebayor halved the deficit on 80 minutes after he let fly a left-foot strike. But Chikatara restored the Eagles two-goal lead in the 82nd minute.

Chikatara had three good chances to have extended the Eagles lead but squandered them all.

He later made up for his misses by slotting home the fourth goal in the 93rd minute.

The Eagles will take on Tunisia on Friday. 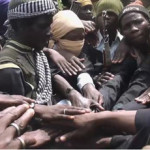