The president Nana Akufo-Addo has assured of a strong leadership ready to fight corruption be it in the past administration or the current one.

In a no nonsense posturing, the leader of the NPP said he will jealously guard the sanctity of his administration and will not allow it to sink.

“I am the captain of the boat and will not allow anyone to capsize it,” he said to torrents of cheers from partisan NPP supporters awash in their party colours

In a speech littered with songs and lasting well over 20 minutes, the president touched on all facet of the country’s development with special reference to the formation of a solid government in record time, building a strong economy, an agenda to fix the broken NHIS, fix education to fight corruption vigorously.

He was speaking at the National Delegates Conference of the governing New Patriotic Party currently underway in the Central Region.

The conference which is under theme “Our roots, our experience our future” is to assess the party’s performance in government with eight months in office and to engender new reforms.

The Conference brought together thousands of delegates across the country and party bigwigs including former president John Kufuor, as well as members of some opposition political parties who were there to give their solidarity messages.

Crowning a day of speeches which saw the party chairman, Freddie Blay the vice president, Dr Mahamudu Bawumia the former president John Kufuor all speaking, the president took over the platform with an unshaking assurance to fight corruption within and outside his government.

In an unshakable assurance, the president said he will not preside over any corrupt administration.

To that end, the president sent a word of caution to his appointees that he has given specific instructions to law enforcement agencies to investigate all of them and to ensure that every single allegation of corruption is investigated.

He said under his tenure corruption will be fought in a non-partisan way and the yet to be appointed Special Prosecutor will do a solid job at investigating and prosecuting all persons found to have embezzled the country’s monies.

Even though the bill sent to Parliament to establish the office of the Special Prosecutor has suffered a temporary setback the president said no amount of underhand dealings will stop him from setting up the office.
“It will come and be manned by those who are committed to do justice for Ghana,” he intimated.

Delving into the health sector, the president said his government inherited a thoroughly indebted NHIS whose debt was 1.2 billion cedis.

In seven months, he said his government has paid 560 million of that debt which means that service providers will have confidence in the system that when they spend money in offering care to patients, they will receive payment for same.

In an atmosphere of great excitement, the president took turns to applaud some of his appointees and singled Education Minister Mathew Opoku who he described as young and dynamic.

Through that dynamism, the president said his flagship policy which is the free SHS will be rolled in the next three weeks.

At 73, many have wondered where he gets his energy to carry out his duties as president but Nana Akufo-Addo said the job at hand to do motivates him each and every day despite enjoying a bountiful grace and spirit of the almighty. 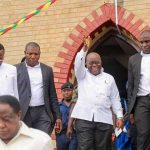