Business Mogul and the Chief Executive Officer of Engineers and Planners, Mr. Ibrahim Mahama says Government’s intention to collapse his business has failed.

According to him, his businesses are far and wide and well established across the African continent and no attempt by government can break him.

“Some utterances of some government officials shows that they have some hatred for the man who has geniunely started his business and employed so many Ghanaians.”

Ibrahim Mahama started his businesses from humble beginnings and has been able to come this far by dint of hard work,he is in to legitimate business and employing so many ghanaians.

Reports surfaced that Exton Cubic and E&P were operating illegally in the forest but the mining company refuted the claims noting that it had legally acquired the Nyinahin Bauxite concession as far back as August 14, 2013.

However, Exton Cubic Group Limited at a press conference yesterday has denied media reports that it is scheming with Engineers and Planners (E&P) to engage in illegal mining at the Nyinahin bauxite concession.

“We wish to state emphatically that the said publications are false and a total misrepresentation of the actual facts of the issue. We wish to state unequivocally that Exton Cubic Group has never engaged in any illegal mining activity in Ghana,” Exton Cubic Group said in a statement following the seizure of trucks belonging to Ibrahim Mahama’s E&P, which was undertaking “preparatory works at the concession.

Exton Cubic described the seizure on the instruction of the Ashanti Regional Minister, Simon Osei- Mensah, and the District Chief Executive of the Atwima Mponua District, as “unlawful.”

According to the Exton Cubic Group, the Nyinahin Bauxite concession was legally acquired on August 14, 2013.

“It came to us as a surprise when without any lawful excuse, the District Chief Executive of Atwima Mponua District Assembly and the Ashanti Regional Minister caused the trucks of the subcontractor to be impounded in the center of the Nyinahin township.

He is therefore asking Government to release his seized trucks to him. 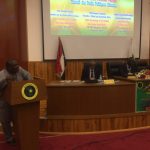