I want someone to prove me wrong: that the NPP is being pursued by demons, and those ruthless “gbeshie” spirits are led by Belzibub himself, and they come in camboo shoes so leaders and members of the party do not perceive ominous signals.
Somebody should tell me that I’m lying!

Hehehehe, as soon as I saw “rise” in Nana Akufo-Addo’s tour theme, I knew it was going to be followed by a “fall”. The other day, a friend of mine was referring to Nana’s “Rise and Build” tour as R&B (Rice and Beans) tour. I love the malapropism here, and this reminds me of the late Ghanaian actress, Araba Stamp who was popular for her malapropism, “fried rice and kitchen.”

Please wait a minute: Agyeeeeei, I saw some interesting scriptures today. Proverbs 20:30 “Blows and wounds scrub away evil, and beatings purge the inmost being.” Proverbs 18:6 “The lips of fools bring them strife, and their mouths invite a beating.”
Oops! Who just wrote on my screen, LMVCA? I have told you people I don’t want trouble oo. Please desist from putting words in my mouth. I never mentioned any name please!

And it happened that Nana’s Rice and Bea… eiii, sorry, Rise and Build tour has ended up in a Rise and Fall tour. Why am I saying this? The NPP’s woes have deepened after his tour. Chairman Paul Afoko has been suspended indefinitely by the National Executive Committee of the party. There was a display of all-die-be-die antics during the meeting, and the party’s private security, the Invisible Forces burnt a motorbike and destroyed the windscreen of a taxi cab.

Many party activists are angry as a result. An NPP “militant” group Bolgatanga Bull Dogs (BBD) in a press release has threatened to scuttle the electoral fortunes of the NPP in 2016 because of the suspension of their National Chairman.

What even makes the issue more serious is that some party Stalwarts have started baring their teeth, and Andrew Awuni, a former Press Secretary to former President Kufour is one of them. He spoke on Neat FM some hours after the suspension. Hear him:

“Between the last two elections, an amount of over 100 million dollars has been disbursed into the party’s coffers. Where did all this money go? Adakabre, what is going on is all about the control of the party’s finances and useless worshipping of a human being. Recently, 3 million Ghana Cedis was released to the party. Kwabena gave each constituency an amount of GHC10,000. This flared up emotions because the money was not released to the executives to spend lavishly. Subsequently another 45 million Ghana Cedis was released which landed on the laps of Abankwa, then the battle began. So aren’t they seeing what Mahama is doing? Making the NDC so attractive today!” Tankweeew, Mr. Awuni, I’m glad you have also seen the magic of the young man from Bole.

That notwithstanding, the near octogenarian flagbearer of the NPP, Nana Akufo-Addo seems to be saying Tweeaa to those livid activists by endorsing the suspension. He confirmed in a statement: “I have been apprised of the decision taken by the National Council of our great party to suspend Mr. Paul Afoko.

Having satisfied myself that due process was rigorously followed in arriving at this decision, I welcome and fully endorse it.”

But more worrying is the beleaguered chairman’s statement that he is still at post.

In a show of defiance, Mr. Paul Afoko, in a press statement said that his purported suspension is unconstitutional, and therefore, the decision taken by the NEC is null and void; so, he is still the National Chairman. The question many are asking is that can Afoko do foko? My answer is that time will tell. Let the music in the camp of the Elephant Family keep playing on. Kikikikikiki, enjoy Lionel Richie’s “All night long.”

Well, my friends, the time has come
To raise the roof and have some fun
Throw away the work to be done
Let the music play on
(Play on, play on) 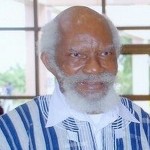