Presidential Staffer, James Agyenim Boateng says the call by one Baah Acheamfour, a supposed member of the opposition New Patriotic Party (NPP), for the resignation of Nana Akufo-Addo as the party’s flagbearer is farfetched.

On Monday, a group calling itself, Save NPP Now, led by its leader, Mr Baah Acheamfour, repeated its call for the resignation of Nana Addo Dankwa Akufo-Addo to save the party from another humiliating defeat in the upcoming 2016 general elections.

“Today, the philosophy and character of the NPP have been defined by ruthless violence, pomposity and chaos… supervised and sanctioned by Nana Akufo-Addo himself and this has gone on well over one-and-a-half years,” he said.

“What makes this situation worse is that our biggest opponent, the National Democratic Congress (NDC), has consistently improved in our stronghold since 2008. The NDC obtained 26 percent of the votes in Ashanti Region in the 2008 elections and improved to 28.3 percent in the 2012 elections,” Acheamfour added.

Speaking on Atinka AM Drive on Tuesday, James Agyenim Boateng said the call by the self-acclaimed NPP member was farfetched. He, however, agreed with the claim by the supposed NPP member that the party has become violent ever since Nana Akufo-Addo was elected flagbearer.

Mr. Agyenim Boateng argued that militancy appears to be the order of the day in NPP, adding that the situation has been so for the past one and half year.

He further said the NPP headquarters at a point in time became a battleground, prompting calls for a police station to be cited close to it to immediately neutralise any form of aggression.

According to Agyenim Boateng, people who express divergent views in the party are seen as enemies and cited the indefinite suspensions of former General Secretary, Kwabena Agyapong and Paul Afoko, former Chairman, as clear examples. Atinka fm 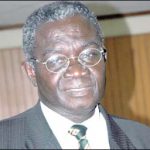