Cabinet has directed the Ministry of Transport to hand over the operations of the PSC Tema Shipyard and Dry Dock Company Limited (PSCT) to the Ghana Ports and Harbours
Authority (GPHA).

Government expects that, with this decision, the Tema Shipyard would in the long term attract the needed resources to venture into the building of Floating Production, Storage and Offloading (FPSO) Vessels for the oil and gas industry even as it continues to provide services to the ports and harbours and related sectors in the short to medium term.http://ghanapoliticsonline.com/

These were in a statement issued by the Minister for Communications, Dr. Edward Omane Boamah in and copied to the Ghana Broadcasting Corporation, (GBC) in Accra, on Monday, June 13, 2016.

The statement said Cabinet also approved at its 41st Meeting the takeover of an offshore mooring facility from Trafigura, free from encumbrances, at the end of the concession by the Ministry of Petroleum.http://ghanapoliticsonline.com/

Adding that, the Ministry will thereafter transfer the facility to the Tema Oil Refinery (TOR) for its use over a period of fifteen (15) years.

According to the statement, this is part of government’s initiatives to comprehensively reposition TOR in Ghana’s downstream petroleum sector to offer regular supply of petroleum products to Ghanaians and our neighbouring countries.

It further said, the decisions taken to transfer the PSC Tema Shipyard to the Ghana Ports and Harbours Authority and the provision of a mooring facility for the use of Tema Oil Refinery are expected to contribute significantly to efforts being made to create more jobs through diversification and value addition to our raw materials.

It said the mooring facility, which is a loading buoy anchored offshore, will also serve as a point of interconnection for tankers loading or offloading gas or liquid petroleum products.

The statement said, other decisions taken by Cabinet are the approval of an Affirmative Action Bill and a $97,450,000 financing for the second tranche of the modernization of the Kumasi Central Market and Kejetia Infrastructure Projects.

Ongoing works to modernize the Kumasi Central Market and the Kejetia Infrastructure Project being worked on by three hundred and forty (340) workers, according to the statement, has reached an advance stage and will provide a modern and befitting environment for traders and their customers particularly women who regularly visit the market.

The Affirmative Action Bill seeks to advance and ensure women empowerment with the view to according females the enabling and progressive environment in Ghana.

The statement said President Mahama is urging all Ghanaians including, Traditional and Religious Leaders, Civil Society Organisations (CSOs), Non-Governmental Organisations (NGOs), Workers, Academia and Students to support the passage of the bill as it makes its way to parliament for consideration and approval.

“Considering the progress Ghana has made in her democratic journey, the Affirmative Action Bill is deemed to be appropriate, responsive, fit for purpose, progressive and long overdue”. President Mahama said during the discussions on the Bill. The statement concluded. 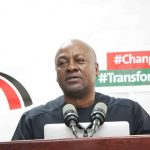