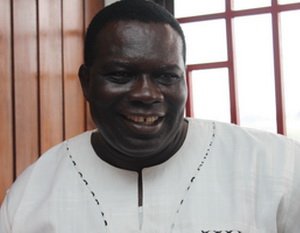 Family and friends of the late Dr. Nii Armah Josiah-Aryeh, a former General Secretary of the National Democratic Congress (NDC) gathered at the Christ Anglican Church in Legon for the burial and thanksgiving service of the former on Friday, June 23.

Tributes read by family and friends projected him as a caring, strong and an astute person who achieved a lot in life.

Dr. Josiah-Aryeh was the National Chairman of the National Democratic Party until he died after a protracted illness in December 2016.

He was a trained lawyer, a law lecturer at the Ghana Law School and the Acting Dean of Wisconsin Faculty of Law, Ghana.

Dr. Josiah-Aryeh was more prominent for his role as the General Secretary of the NDC prior to the 2004 elections. He, however, resigned from the party after he was suspended for allegedly collecting bribe from the then governing New Patriotic Party.

He then joined the Nana Konadu Agyemang Rawlings-led National Democratic Party where he was named chairman at an October 13, 2012, congress.

Born in James Town in Accra in 1958, Dr. Nii Armah Josiah-Aryeh attended Accra High and Achimota School for his O and A level education before proceeding to read History and Law at the University of Ghana. He was called to the Bar in 1983.

In April 1984, he left for the UK for his postgraduate education, where he obtained LLM (LSE), Certificate in Law Teaching (UC, London) and PhD (SOAS). He returned to Ghana in January 1998 as a private legal practitioner and lecturer at his alma mater.