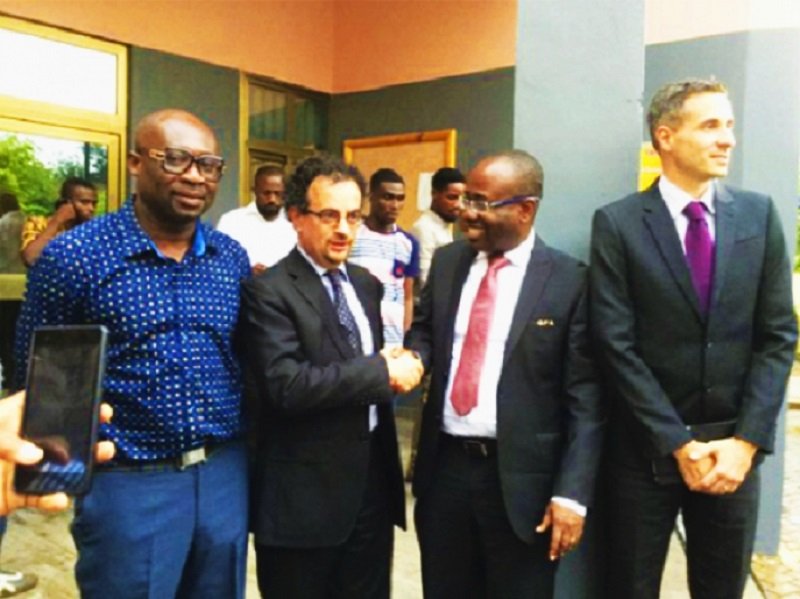 British High Commission to Ghana Jon Benjamin meets GFA Boss, Kwesi Nyantekyi and his GFA Officials
The British High Commission to Ghana Jon Bejamin and the President of Ghana Football Association, GFA Mr. Kwesi Nyantekyi have announced a strategic partnership aimed at using football as a medium to promote peace during the upcoming Presidential and Parliamentary elections in November.

The partnership was announced on Tuesday after the British High Commissioner, Mr. Benjamin, held a closed-door meeting with the Mr. Nyantekyi, his Vice, George Afriyie, and other officials of the Association at the GFA Secretariat in Accra.

Briefing the media after the meeting, Mr. Nyantekyi said the discussion centered on ways to collaborate in promoting peace through football and also developing the game in Ghana.

“We discussed issues of mutual interest to Ghana football and the UK and also about using football as an instrument to promote peace during the elections.” Mr. Nyantekyi said.

“I can confirm to you that we are not enemies of the High Commissioner; we are very good friends and we respect his views and hope to build on this relationship to improve football in the country,” he added.

The High Commissioner, whose visit comes after his allegations earlier that GFA officials used monies from FIFA to acquire luxury cars instead of using them to develop football pitches, said the issue had been discussed with both sides issuing and accepting apologies.

He stressed that the High Commission would be honored to make a contribution to the election through football, given that the election is a sovereign affair.

Mr. Benjamin added that both parties had resolved to work together to popularise the work of the foundation of the first black professional footballer, Arthur Wharton.

He also expressed gratitude to the GFA for welcoming him to their offices, adding that he is looking forward to visiting other GFA facilities such as the Ghanaman Soccer Centre of Excellence at Prampram.