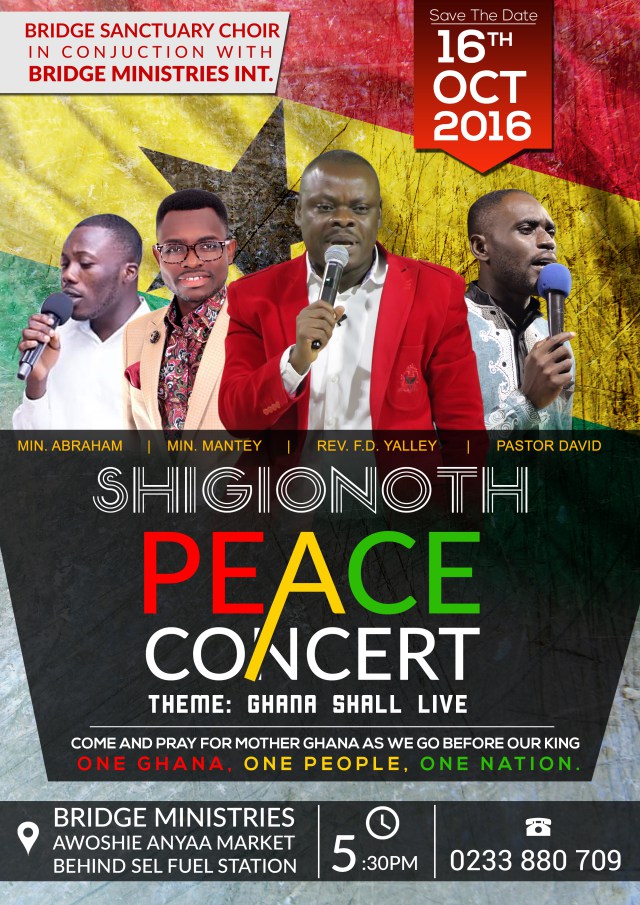 The Bridge Ministries International will be organising a concert dubbed the Shigionoth Peace Concert at the forecourt of the church located at Anyaa market behind the Sel fuel station on the 16th of October, 2016. According to a bible correspondence (thislamp.com) Shigionoth is the plural of the Hebrew Shiggaion

(שִׁגָּיוֹן), and it refers to a musical term that relates to how a psalm should be performed.

As a ministry that believes in restoring a generation of promise, purpose and power, one can only be impressed at the show of civic responsibility to its immediate community and most importantly the nation. In addition, a church that is highly populated by men and women of youthful exuberance, it’s important that the message of political cataclysm often inspired by youth fury is well drummed home.

The General overseer of Bridge Ministries International, Rev. F. D. Yalley is not just an anointed man of God who is doing great exploits but one who has passion for national prosperity which he often says can only be achieved through national peace. He has keen interest in national leadership and over the years has been writing thought-provoking articles about matters of national interest.

It is no surprise, the preparation towards this very peace concert has been a matter of essence to him. The Shigionoth Peace Concert is not just an ordinary church program going on but one that is aimed at building an atmosphere for patriotic prayers interspersed with eclectic music of worship and praise by the Bridge Sanctuary Choir led by Pastor David.
Shigionoth Peace Concert
Pastor David leading the church in worship (Image Credit: Bridge Ministries International)

The program which is expected to start at 5:30pm will be having awesome invited guest artistes such as Minister Anane Mantey performing to thrill the audience.The central players as far as this electioneering period is concerned (parliamentary aspirants) will be given the opportunity to share messages of solidarity, love and peace.

The church can’t relent on its effort to preach peace because Christ is peace and they that love him must talk about him anywhere. Let’s come one, let’s come all. The future indeed belongs to the youth and we must guard the ties that bind us and not that which keeps us oceans apart.